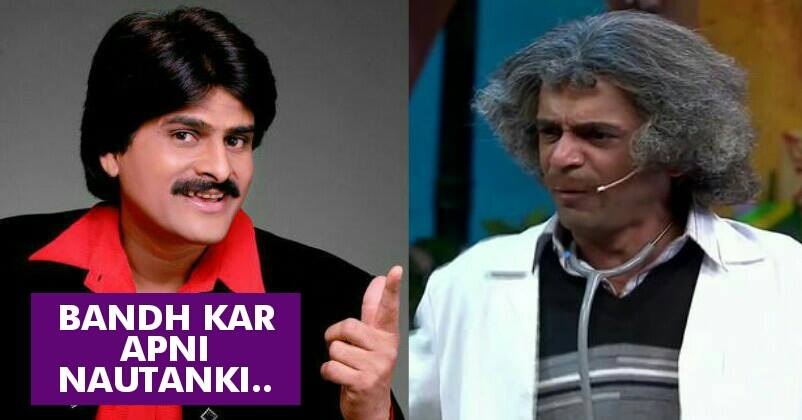 We all know about the famous fight between Kapil Sharma and Sunil Grover. The fight is only taking ugly turns. There are many people involved in the fight and that is making it worse.

The media is adding fuel to the fire by asking people to comment on the same. We believe the people involved should sit and solve the matter amicably.

We already reported in our earlier news that Kapil Sharma has got Raju Srivastav, Sunil Pal and Ahsaan Qureshi for an episode on the show. The trio shares a special rapport with Kapil and when he invited them, they gladly accepted the offer and came to Kapil’s rescue. So after the shoot wrapped up, Ahsaan Qureshi did an interview with Indian Express. In the interview, he was asked about the fight between Sunil and Kapil and he had a different perspective to it.

“If you don’t have the guts to speak because you think he won’t take you again, then that means he is your God. Then leave this nautanki. You are just keeping quiet, he will cajole you and you will be back on the show. Grow a spine. Being a comedian is different but being human is also important.

He dented his image last time when he came back to him. What if Sunil’s show had worked and Kapil’s had flopped, would he have come? He came after he flopped. So, he is also selfish. He is not a saint. Why can’t you face the media and speak the truth? He just wrote a short message on Twitter. That’s it. He should speak more. But then I think, he will be back.” Ahsaan further elaborated his opinion on the fight,

“This fight can’t be taken seriously because a similar fight happened earlier too. Sunil went and started his own show. It flopped and he was back on Comedy Nights with Kapil. If you were so firm on your stand, then why did you come back? Right now also, people are missing him but he should honor his word. People told us you don’t go on his show, I say I never begged Kapil to give me work. If you want to call us, it’s okay otherwise we have a lot of fans. And finally, he called us. Toh yeh hoti hai baat. He was insulted earlier too, but he forgave him and hence encouraged him.”

When he was asked about Kapil’s drinking habit, he said, “He should not drink. It’s not healthy. He is a sensible man. Also, Kapil and Sunil form a great pair on screen. Sunil is very important for the show, so he should be back on the show. Kapil should understand that he should not insult his team members. This should end.”

We just hope Ahsaan Qureshi’s words are taken seriously and the two comedians resolve their issues as soon as possible.

Fresh Media Reports Claiming That Sony Channel Will Not Renew Contract Of Kapil Sharma Show!
Phillauri Actress Mehreen Looks Completely Different In Real Life. Have A Look At Her 10 Pics!