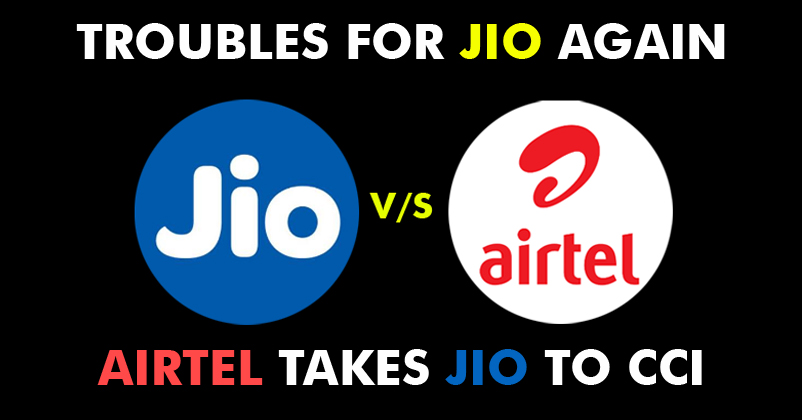 After knocking the doors of TRAI (Telecom Regulatory Authority of India) and TDSAT ( Telecom Disputes Settlement and Appellate Tribunal) to seek some help against Reliance Jio, Bharti Airtel has now lodged a complaint with the Competition Commission of India (CCI). As per the reports, Airtel has accused Reliance Jio of predatory pricing, and anti-competitive behaviour.

As per the details stated in a report in The Financial Express, the complaint was launched by Airtel on February 2. The battle began after Jio extended its free data, voice calls, SMS offer till
March 31 2017. The initial free data offer from Reliance was allowed until December 31st 2016. That deadline did not violate the pricing criteria set up for telecom companies significantly. However, the recent increase in the duration of Free services from Reliance Jio are contradicting the rules quite severely.

The free calling services offered by Reliance Jio has also led to a network congestion on almost every company’s network. Airtel alleged that TRAI has been favouring Jio partially and this has led to some heavy deficits in Airtel’s profit count. Airtel had launched a complaint with TDSAT back in December 2016 but no action has been taken as yet. Bharti Airtel is still the leading telecom operator in India despite all the losses caused by Jio and its free offers.

The recent complaint lodged by Airtel on February 2 states, “No other telecommunication operator in the Indian market (or even across the world) is offering services free of cost or any free unlimited voice calling on the network of other operators, offering free voice calls cannot be said to meet the competition and fall under the exception. The same is predatory.”

Last month, Jio had replied back and asked TRAI to impose the highest possible penalty on Airtel. Jio alleged that Airtel’s advertisements about its various tariff plans violated extant telecommunication laws. However, Airtel denied all those allegations stating, “We are not aware of any such complaint. All our tariff plans are fully compliant with the prevailing
regulations.”

The battle between Jio and other telecom companies doesn’t seem to have any end in the near future. Jio has not replied to any of the allegations imposed on it and has instead kept complaining about its rivals. No telecom companies get the services for free and thus Jio’s tactics have completely left all other companies helpless. Why and how Jio is able to manage the free supply to its customers still remains a mystery.

Whatever be the outcome of these complaints lodged against Jio, one thing is for sure, the telecom industry has suffered a lot and will be ready to give it back to Jio at any cost. Do let us know what you about this legal battle going on in the telecom industry in our comments section below.

Continue Reading
You may also like...
Related Topics:Airtel Takes The Legal Battle Against Jio A Step Further! This Time Complaints To CCI For This Reason!