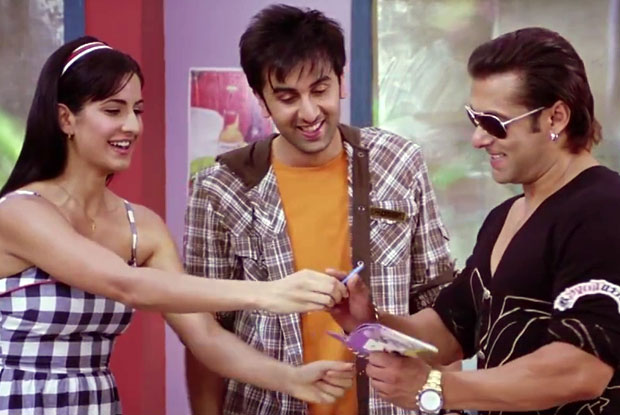 Salman Khan’s all worst nightmares are one by one turning into reality. First his conviction in the 2002 Hit & Run Case and now Ranbir announcing his relationship & marriage with Katrina Kaif. Seems that we will soon witness this scene of the movie AJAB PREM KI  GAJAB KAHANI. Ranbir kapoor and Katrina Kaif have finally broken their silence about their relationship. Sources reported that the couple were in very good terms since 2009 and have been dating each other from long time after Katrina decided call off the relationship with Salman Khan. Speculations about Ranbir & Katrina have gone High since then. Their Families were seen together on several Occasions. But all the doubts raised in several minds were cleared after Ranbir openly confirmed that he is dating Katrina. Ranbir has not only admitted about his relationship with Katrina Kaif, but he has also mentioned that both of them have decided to move forward in relation and get married next year.

“This year both of us are extremely busy, so there won’t be any time for marriage. We have planned to tie the knot by the end of next year. Both of us have agreed on that,” said the actor in an interview with a regional magazine, Ananda Bazar Patrika.

He even mentioned that “Both of us are sure about our relationship and if we don’t open about it now, it would be showing disrespect to the relationship. I am 33 now and it’s time I have my family. Even Katrina wants that. I have grown up in a family where film is everything. So I know the importance of gossip and my funda is simple. When there is gossip, try not to react and it is advisable not to think too much about yourself .”

Now that Ranbir has cleared the rumors it would be interesting to see how bollywood reacts to the news, especially how Salman Khan reacts to this.