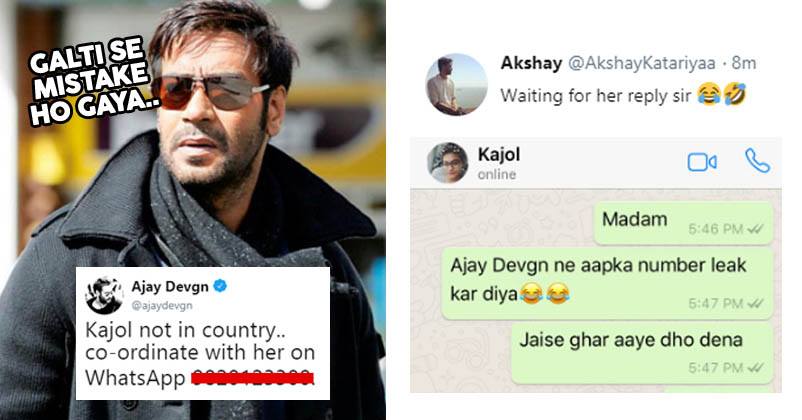 Usually, it’s not very easy to get a celebrity’s number on social media. Fans keep waiting for a chance to get that and today, Devgn gave them one.

Well, he accidentally disclosed Kajol’s WhatsApp number on Twitter and got himself trolled. He shared a tweet, which appeared more like a DM. In that, he wrote, “Kajol not in country.. co-ordinate with her on WhatsApp **********.”

As soon as this tweet got viral, people started slamming the actor left and right. Some thought that he has tweeted after eating gutkha. On the other hand, some asked him to share other actresses’ number.

Here is the screenshot;

Here are some hilarious replies;

Waiting for her reply!

Waiting for her reply sir pic.twitter.com/iT94zfAouc

We all know it was inadvertently tweeted.. why ppl like you start troubling others like this? This is what is wrong with us. Shame on u

Hope Kajol doesn’t school him once she’s back. She must have received too many messages by now.

Another Romantic Jodi Inside The House After Anup Jalota & Jasleen? Check Out Who They Are
Major Twist In Bigg Boss 12 Nominations This Time. It’s Going To Be Controversial