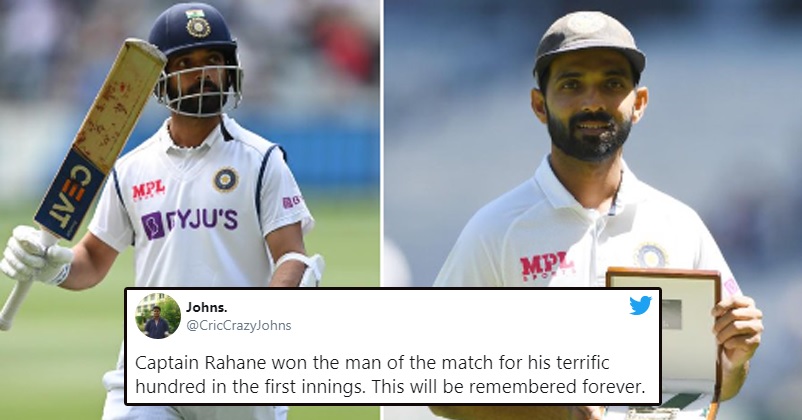 The Indian cricket team made history under the leadership of Ajinkya Rahane by winning the Boxing Day test match against Australia by 8 wickets. Ajinkya Rahane has led from the front and the calm manner in which he led the team has made every cricket lover his fan. In fact, it won’t be wrong to say that the Indian social media platforms are flooded with posts praising him and declaring him the new Internet hero. 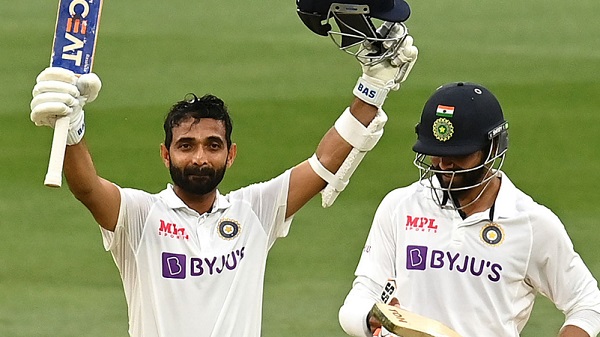 Many cricketing experts gave the Indian team no chance to win the second test match as India’s star batsman and skipper Virat Kohli and pacer Mohammad Shami were not part of the squad. While Virat is on the paternity leave as he wants to be with his wife Anushka Sharma during the birth of their first child, Shami has fractured his arm.

What made the cricketing experts more doubtful was the performance of team India in the second innings of the first test match in which the Indian squad crumbled at their lowest total of 36. However, Ajinkya Rahane didn’t let the past performance affect him and his teammates; he played a superb innings of 112 in the first innings and scored 27 runs in the second innings. The team also showed a great fighting spirit under their new skipper and gave their best in all the departments whether it was batting, bowling or fielding. The Indian bowlers bowled in an amazing manner and restricted the hosts at 195 in the first innings and at 200 in the second innings.

The Indian fans were still a little afraid when India got the target of 70 to chase in the second innings because it was just 10 days ago that the Indian team scored its lowest total in the test matches. What made them scared was the dismissals of Mayank Agarwal and Cheteshwar Pujara but Ajinkya along with Shubman Gill ensured that the team didn’t lose the track and scored the winning run for India. 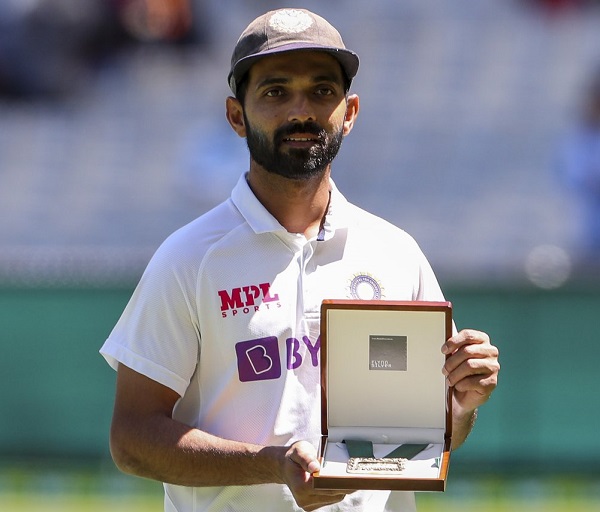 The Indian cricket fans were already very happy with Ajinkya Rahane because of the gesture that he showed towards Ravindra Jadeja after he got run out in the first innings and with this victory, he has become a favourite of many Indian cricket lovers now.

Rahane is being showered with love for not just his calm and cool attitude but also for the correct decisions he made on the field as well as for rotating the bowlers in a proper manner after Umesh Yadav got injured. Ajinkya Rahane has been adjudged as the Player of the Match for his gutsy innings and this is certainly a tight slap on the faces of those who were claiming that Australia would clean sweep the series.

This is how people showered praises on Ajinkya Rahane for the amazing performance:

What a win this is, absolutely amazing effort by the whole team. Couldn't be happier for the boys and specially Jinks who led the team to victory amazingly. Onwards and upwards from here 💪🇮🇳

To win a Test match without Virat, Rohit, Ishant & Shami is a terrific achievement.

Loved the resilience and character shown by the team to put behind the loss in the 1st Test and level the series.

Well done India 🇮🇳…absolutely brilliant. Has to be one of the most impressive overseas win given the circumstances coming into this game 👏🏻👏🏻#AUSvIND

A really special win at the MCG.
Great Determination and great character. Rahane led from the fron,the bowlers were terrific and Gill is chill. pic.twitter.com/X3UO8H2LgR

Lot of positives from this win. Rahane led the side brilliantly, bowlers were relentless but the biggest positive is the performance of two debutants. Both of them were confident and not overawed by the big occasion. Strength of Indian cricket is their strong bench strength.

Stunning response from India after the 1st test, Australia’s top order have been horribly exposed, some tough decisions required. #AUSvIND

Congratulations #TeamIndia! What a victory at Melbourne to level the series. Historic in every sense. Well played @ajinkyarahane88 @imjadeja @ashwinravi99 @RealShubmanGill @Jaspritbumrah93 Siraj and everyone in that dressing room for showing such resilience #AUSvIND 🇮🇳

What a victory for the #IndianCricketTeam , brilliant captaincy by @ajinkyarahane88 leading from the front with the bat and a collective effort from the best bowling side in test cricket today! The border-gavaskar series comes alive! #INDvAUS #AUSvIND

Here are the reactions from Indian cricket fans:

Just 10 days gap – What a remarkable turn around by India. History made in Melbourne under Rahane.

Can't believe that you can win cricket matches without the captain throwing in some abuses here and there. #AjinkyaRahane

After heavy defeat everyone is disappointed with the performance then comes A warrior A man, without 2 main bowlers without best batsman, with debutants this man did something that noone can ever imagine, AJINKYA RAHANE WHAT A MAN, A UNSUNG WARRIOR, History will never forget you pic.twitter.com/LE4gongM5c

Fittingly Ajinkya Rahane hits the winning runs.What a match he has had: led the side well,was spot on with field placements & bowling changes.Hit a match-winning ton. Rotated the bowlers well after Umesh got injured.Great character shown by the Team after the collapse at Adelaide

Ajinkya Rahane wins the Johnny Mullagh Medal for his outstanding century. Deserves every bit of credit for his batting and captaincy also, he's been spot on in the absence of Virat Kohli. pic.twitter.com/qgOzeCL0xQ

#AUSvIND #INDvAUS
*Rahane And Co. Going back to the Hotels Room after winning the Match Be like-: pic.twitter.com/LjkVglH2JC

Under kohli's As a
captaincy Captain pic.twitter.com/jgsYeJxRBi

Captain Rahane won the man of the match for his terrific hundred in the first innings. This will be remembered forever.

The third test match will start from January 7 and it will be played at Sydney Cricket Ground. Let’s hope that we win it too!

New Zealand Fan Roasts Pakistan By Reminding Their Errors On Scoreboard In NZvsPAK, Twitter Reacts
Michael Vaughan Got Roasted Like Never Before By Wasim Jaffer & Indians For 4-0 Whitewash Tweet