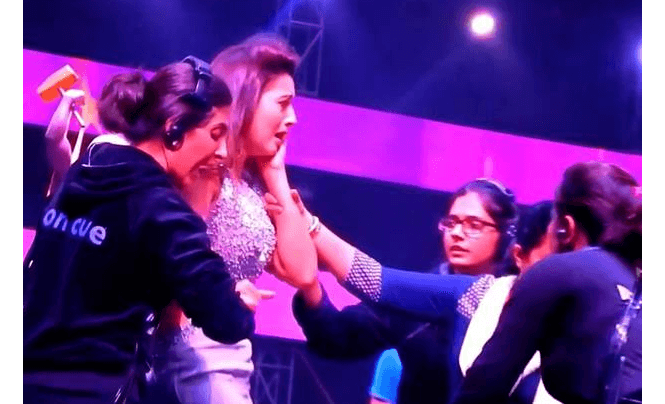 One of the most tweeted and condemned act of slapping, the actress Gauhar Khan threw enough limelight on her. But the ‘slap gate’ episode has taken a new turn with Mohammed Akil, now claiming that Gauhar Khan paid him to slap her in public forum. Akil is the same man, who slapped Gauhar during the filming of a popular TV reality show, stating that her dress were provocative and not meant for a Muslim girl to wear.

If the claim that Gauhar paid for slapping her is true, than quite literally, showbiz is all about gaining fame at the cost of any sort of publicity. As per Akil, he says that a small role in Dabbang 3 was also promised by Ms. Khan. The slap drama was completely staged and “well-versed just like a well-written film script”, claimed Mhmd. Akil.

Akil who is a junior artiste disclosed this sensational news in the media because his deal with Gauhar went wrong, and Ms. Khan didn’t remain true to her words. The slap episode did created a lot of buzz with many celebrities standing up in support of Gauhar Khan.

But with this new disclosure, the story has taken a new turn. And, it will be interesting to see, what Ms. Khan has in store to say for this act of her.

Do you think, celebrities can go to any extend to keep themselves in the limelight?