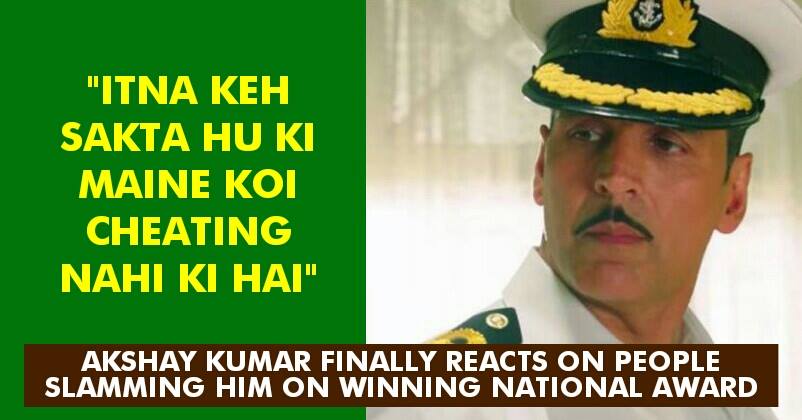 We all the know the importance of National Awards in India. It is one of the most prestigious awards in the film industry that is celebrated across all regional cinemas and languages.

From past few years, the credibility of the National Awards is constantly under the scanner of criticism. It has been questioned and accused of partiality, favoritism and much more.

This year, we know Akshay Kumar won a National Award for Best Actor for his performance in Rustom. We already told you all that how social media became people’s voice of opinion on Akshay Kumar winning the award. They did not agree to the decision and as a result Twitter was filled with many disappointing messages.

The debate around Akshay Kumar winning the award is all because people felt that performances in the year 2016 by other actors were comparatively better. Amitabh Bachchan in Pink, Shahid Kapoor in Udta Punjab and Manoj Bajpayee in Aligarh had a much better scorecard. Among all why was Akshay Kumar chosen for the award and that too for Rustom? The debate surely was on point.

It was also said that since Priyadarshan was one of the chairpeople of National Award, the case of Akshay Kumar winning the award could be a result of favoritism.

On this Priyadarshan clarified,

While the actor himself seemed a little hurt and in an interview with leading daily he revealed that,

“Itna keh sakta hun mai ki ye award bhi maine imaandari se jita hai. Maine aaj tak cheating nahi ki. Neither have I ever made a call to anyone to win an award nor have given money or done favours for it.”

Well, we get Akshay Kumar’s point totally as we know he is the only star whose presence in award shows is very minimal. He is hardly even considered for nominations. However, we definitely feel jury should have taken a better decision. What do you people feel about Akshay Kumar’s statement?