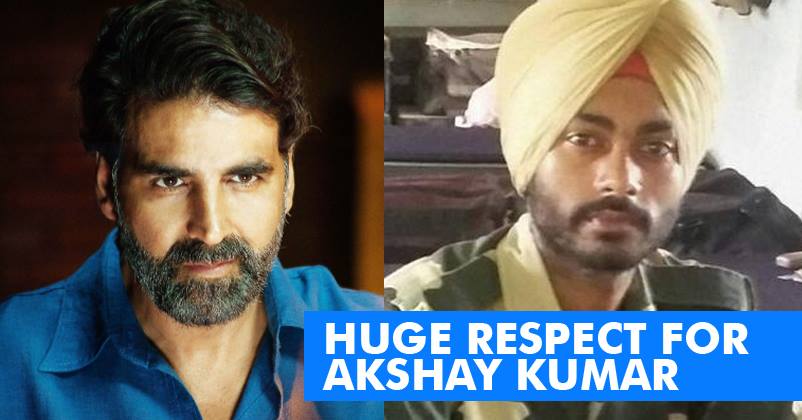 Since the Uri Attack there have been a lot of talking about our Indian Army, the soldiers who protect us and let us sleep peacefully every night by guarding the nation’s borders. Post our first surgical strike, Indian Army as well as our PM received a lot of good wishes for their heroic move. During the Uri Attack we lost so many precious jawans. Yes, we can feel sad about it but we definitely cannot feel exactly what their families are going through.

People joined hands and posted their condolences for the families. Those posts were a try to show their support for the martyrs’s families. Some of the soldiers who died while protecting our nation were the only bread earners of their families. Verbal support wasn’t enough. Though, financial support won’t bring those soldiers back to their families but will definitely assist them in different ways. There were lot of controversies too!

Neglecting all the debates and controversies, Akshay Kumar came out as a real hero! 26-year-old, BSF jawan Gurnam Singh, who got injured during crossborder fire in the Kathua district of Jammu and Kashmir, succumbed to his injuries at night after getting targeted by the Pakistani snipers. Sadly, the doctors couldn’t save the Jawan. This very news would have already killed Gurnam Singh’s family from within. Akshay Kumar, who played a defense officer in his last film Rustom proved that he is not just a reel life hero.

He came forward to support the family financially and donated 9 Lakh rupees to them. This act by Akshay Kumar definitely deserve a salute.

We hope Akshay Kumar will come out as an inspiration for many. As your words can only console them, but there are certain other needs that can’t be fulfilled just by your words.

Isn’t Akshay Kumar an inspiration for all of us? Don’t forget to share your views with us in the comments section below!

Priyanka Jagga’s Audition Video Is Going Viral! She Has Made Some SHOCKING Revelations In This…
Pakistani Chaiwala Plays BIG! Hired A Personal Advisor, Social Media Manager & Tour Manager Too!