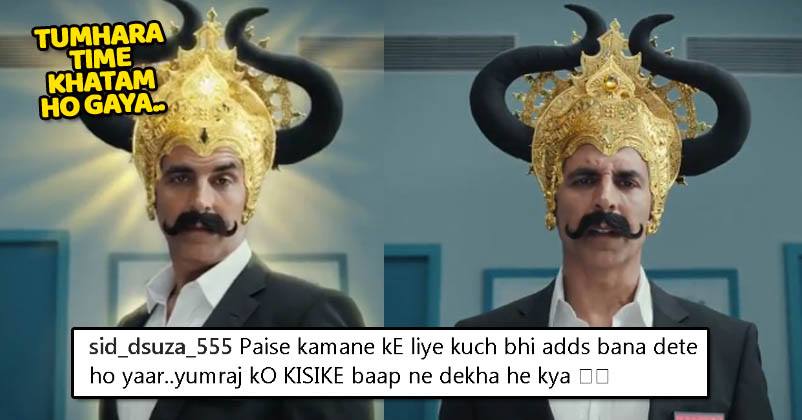 Sometimes, Bollywood celebrities have to be flexible enough to respect the script. They also need to transform themselves as per the demand of the role.

Some Bollywood actors also play superheroes and goddesses well; we still remember some awesome performances which had wooed our hearts.

For Swachh Bharat Abhiyan, Kangana Ranaut had essayed the character of Goddess Laxmi.
Recent one to do so is actor Akshay Kumar. Well, he donned the avatar of “Yamraj” for Policybazaar’s new ad.

He sent out a great message that insurance holds vital importance for a family. Akshay posted the video of the new ad on Instagram and said that he tried essaying the role of modern Yamraj, the God of death.

Happy to announce my association with @policybazaar_in and @paisabazaar. Was good fun playing a new-age Yamraj 😈 Your thoughts?

Some people took this ad as an ad & enjoyed it, but there were some who started trolling him. People also brought religion aspect in between. Have a look at the comments;

Whatever it is, people should learn to have fun with such ads rather than trolling the actor, don’t you think so?

Continue Reading
You may also like...
Related Topics:Akshay Kumar, Yamraj

Remember Anandi From “Balika Vadhu”? She Has Grown Up & You Won’t Be Able To Take Eyes Off Her
These Bollywood Stars Own Some Really Precious Customized Items. We Can Only Dream Of Them