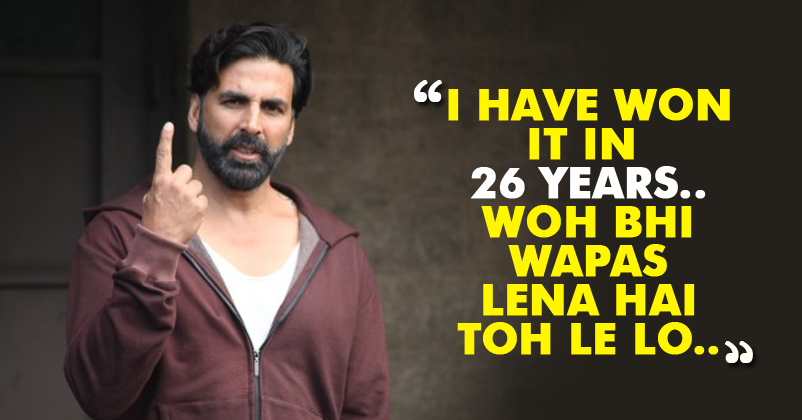 Akshay Kumar won a National Award for Rustom and Airlift and people in India had mixed feelings about his win.

Some bashed the decision while some thought that Akshay Kumar as an artist, in particular, deserved the award much before he actually got it.

While Akshay Kumar attended the event of launching insurance for stuntmen who work in the movies, he spoke about his National Award win to the media.

He clearly slammed the debate around his win and the comments on how much he deserved it or not. He said ‘take it back if you all feel I don’t deserve’.

Akshay Kumar told the reporters at the event,

“I’ve been hearing it for past 25 years, whenever someone wins there is some discussion around it. This is not new. Someone or the other always creates a controversy. ‘He shouldn’t have won, the other person should have’. It’s okay. I’ve won this after 26 years, ‘agar woh bhi aapka mann kare toh le lo’ (take it back if you feel like it).”

The event Movie Stunt Artist’s Association brings forward the amazing initiative to ensure insurance of the lives of stuntmen. Akshay Kumar and Asian Heart Institute have partnered to cover insurance of 370 stuntmen under the health and accident scheme for 2017-2018.

When he was asked whether he should be considered for Padma Bhushan because of his noble deeds, philanthropic works, and achievements, he said,

“You have to do major work to earn such an award. Only then people can feel you deserve the award. We keep doing these things for our stuntmen, whatever we can in our capacity.” Akshay Kumar even urged that the Bollywood Award ceremonies should consider the talent of Stuntmen and introduce a category for them.

Well, we are so proud of Akshay Kumar for taking up such initiatives. Akshay Kumar indeed makes a valid point with his National Award win.

Why Kattappa Killed Baahubali? Prabhas Finally Answers The Toughest Question At A Recent Event
BAD NEWS! The Kapil Sharma Show Is Going Off Air & This Time It Is Confirmed!