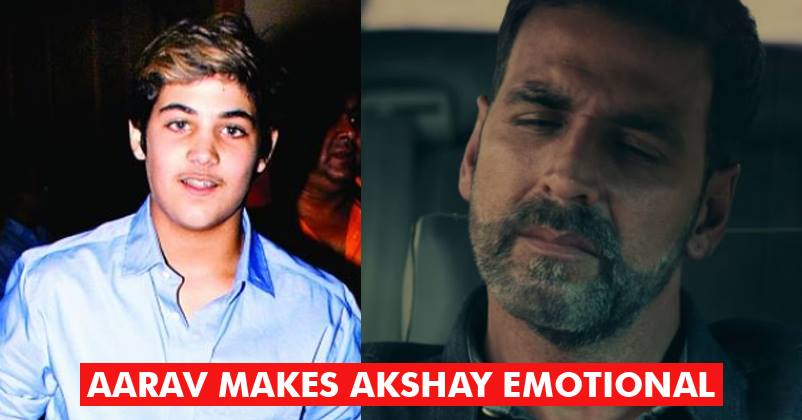 Emotions are not just some bright hormonal activities that play inside a person’s body as per said by some scientists, but are much beyond that. It is something that just can’t be measured in terms of magnitude but can be deeply and heavily felt once you experience it.

The epic raw action & comedy superstar of our Bollywood industry, Mr. Akshay Kumar and his wife, Mrs. Twinkle Khanna went through the same phase when they realized something. And perhaps, this is something that all parents in our world go through when they realize that their little children aren’t that ‘Little’ anymore. Maybe, that explains a lot about parenthood. We all know that how professional Akshay Kumar is when it comes to commitments. By signing four films back to back (Jolly LLB, Crack, Naam Shabana and 2.0 (Enthiran 2), it is quite understandable that how serious he is towards his profession. But in the midst of all these projects, it is always quite difficult for him to manage some time for his own family just so as to stay and talk to them. Apart from being a superstar, he is a husband and more importantly a FATHER too. Spending some quality time with his family isn’t the kind of luxury that Akshay Kumar can afford. But this Diwali, when the whole of the Bollywood was partying hard at Amitabh Bachchan‘s and Anil Kapoor’s Diwali bash, Akshay Kumar decided to spend some time with his family in the peaceful and beautiful city of Cape Town. And this trip made him realize that his little kid is not a kid anymore. This is what he tweeted.

That feeling when you realise your little boy is not that little anymore…almost my height and borrows my shoes 😁 #goodfeeling #bondingtime pic.twitter.com/k3WifW3gfS

And this very moment is definitely the most beautiful and soothing moment in parenthood. Parenthood isn’t about seeing your kids growing up, but it’s all about growing up with them too. This is how God has planned things for everyone.

Now when a tough person like Akshay Kumar melted in such a beauty, his wife Mrs. Twinkle Khanna was bound to lose into this realization. Her daughter Nitara is probably the cutest one among them. Twinkle Khanna went all emotional and shared a picture of her on Instagram with the caption – “As the sun begins its journey to light up my day in a distant land #Capetown”

The beauty of this picture is not about the background that many people might be probably thinking. But it is about the bond that a mother and her daughter share. No matter how big superstar or a celebrity you are, when it comes to parenthood, you ought to raise your kids just like how any normal people do and that is by love and care. And this is what Akshay Kumar and Twinkle Khanna have been doing.

Here’s What Kajol Has To Say About Ajay Devgn’s Kissing Scene With Erika! Possessive Wife!
RGV Crossed His Limits! Took A Dig At Atal Bihari Vajpayee & Other Ministers Over Their Picture!