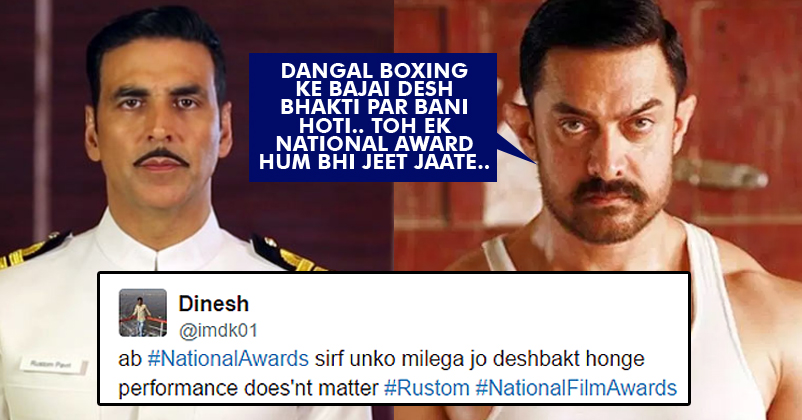 Akshay Kumar won in the category of ‘Best Actor’ of the National Awards for the movie Rustom. Well, the news is a pretty good one especially for all the Akshay Kumar fans out there.

However, when the news came out the reactions had extreme varieties. There were few people who were absolutely disgusted with the winner list. They thought it is some kind of joke. Few people accused the National Awards’ jury of being partial, unfair and bribed.
There were few genuine fans of Akshay, who thought the man deserved the award since the normal awards don’t value his talent at all. On a serious note, Akshay Kumar doesn’t really win awards like IIFA or Filmfare, he is always kept out of choice. We totally agree that Akshay Kumar is a very fine actor who deserves every bit of recognition but genuinely the movie shouldn’t be Rustom to be specific.

Akshay Kumar has done pretty well comparatively in other movies, we could easily give him National Award for those in the specific year. This time it looked quite forced. People thought that Aamir Khan’s performance in Dangal was much better than Akshay’s in Rustom.

Below are the Twitter reactions to Akshay Kumar’s National Award win.

Some people dragged Kejriwal into this

People thought it is as good as a joke

I like akshay sir. He is a great performer. But him getting a national award for Rustom is a joke. #NationalFilmAwards #NationalAwards

There was a bit of sarcasm too

Maybe a bit too much of sarcasm

#NationalAwards A man proving to be a citizen of India won the National Award for best actor.

Some people had no idea how to react to the news

There were jokes too

Some personal attacks were also made

Some genuine opinion were also voiced

No doubt #AkshayKumar is a wonderful actor, but do you think his role in Rustom really deserved a #NationalAwards

They Hate Us Cause They Ain't Us… Congrats @akshaykumar #NationalFilmAwards #NationalAwards

Many many congratulations. One of the finest actor. Well deserved. @akshaykumar #Rustom #NationalAwards

Watch how Akshay Kumar reacted to his own win

A win is a win, no matter what. We congratulate Akshay Kumar on winning a National Award, wishing him all the success and luck.