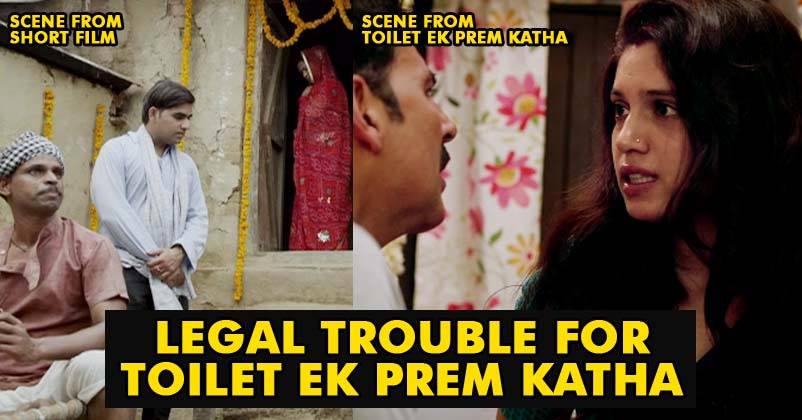 Akshay Kumar’s upcoming flick “Toilet: Ek Prem Katha” is counted among the most anticipated films of 2017 and needless to say, fans have great expectations from the movie. Indisputably, it appears to promote PM Modi’s Clean India Campaign (Swachh Bharat Abhiyaan). Going by the trailer, one can easily make out that the movie is about struggles of a husband who makes an attempt of building toilets in his village after marriage, as he got to realize the problems of his wife, the character played by Bhumi Pednekar. However, there’s some bad news for the makers of “Toilet: Ek Prem Katha”, as the film has got into some legal trouble. Yes, that’s right!

Mumbai Mirror reported that the makers have received a legal notice along with a cease and desist notice regarding trailer and promotion from a documentary movie-maker named Praveen Vyas. As per Praveen, the makers of “Toilet: Ek Prem Katha” have stolen few dialogues as well as scenes from “Manini”, the short film he made in the year 2016.

Just to inform, his documentary received the 3rd prize at International Film Festival of India 2016. Here’s what the maker of “Manini” disclosed in a media interaction,

“Manini follows the female protagonist as she protests against lack of a toilet in her marital home on the first night of her marriage after female relatives wake her up before sunrise to tend to nature’s call in an open field. The scenes in Toilet: Ek Prem Katha’s trailer shows the same interaction between characters. Its plot was novel and the characters unique and my docu-feature was commended for its creativity and treatment. No one can make another cinematographic work or any other derivative work without my written consent if their work directly resembles mine.”

Moreover, he has made an appeal in the court to put a stay on the release of “Toilet: Ek Prem Katha”. Shital Bhatia, producer of the Akshay starrer, has also spoken up on the matter and here’s what he said,

“These allegations are baseless and border on harassment. The script of our film has been registered under our writers’ names, Siddharth and Garima, with the authorised industry association since 2013. Furthermore, the film has been in the public domain through various news stories since July 2015. We firmly deny all the claims made by this gentleman who is obviously misled. It is sad that genuine producers have become soft targets for this kind of nuisance.”

To reach any conclusion, it’s firstly necessary that you watch “Manini”! Here it is:

Now take a look at the trailer of “Toilet: Ek Prem Katha”:

Now you yourself can decide who’s right and who’s wrong! What do you have to say in this connection?

Revealed! Bharti Is Going To Play These 2 Characters In TKSS! Tough Competition To Others!
This Indian Cricketer Is Coming On TKSS With His Family & We Are Waiting To Know His Secrets