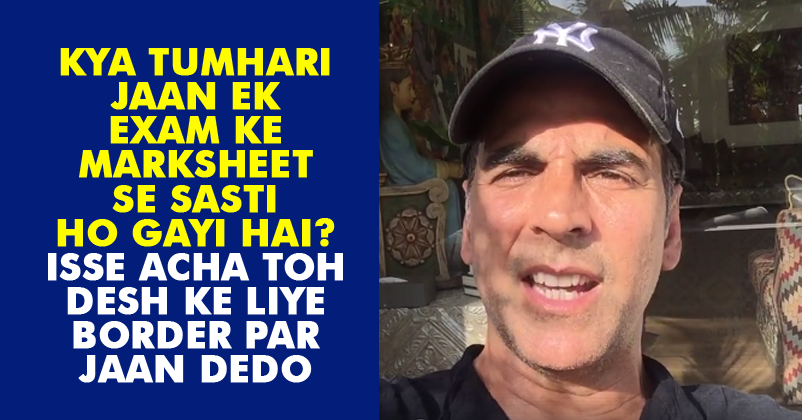 Akshay Kumar is probably the happiest actor of Bollywood at the present time after winning National Film Award for the first ever time for “Rustom”. Just to inform, he completed silver jubilee in Bollywood but still didn’t bag any award. And today is perhaps the most special day of his life, as he will receive the award from none other than the President of India, Pranab Mukherjee. Khiladi Kumar recently took to Facebook to express his feelings over the achievement. On one hand where he’s quite pleased about the award, he conveyed his sense of utter shock and disappointment over the extreme step of suicide taken by youngsters on the other. This naturally disturbed and hurt him to the core and to make youth as well as parents understand the importance of life, he narrated a heart-felt incident from his childhood. Once he failed in a class but surprisingly, instead of getting angry, his father brought him to the right path by making him realize his strength!

Here’s what the actor said,

“I want to say something from the bottom of my heart. I am extremely happy that I will finally be receiving my National Award from honourable President today. When the awards were being announced, I was talking to my mother and was recalling the time when I had once failed in my exam. I was worried that my parents would be extremely upset and angry with me. When I showed my report card to my parents, my father asked me what I wanted to do in life. I said I want to do sports. So, he said I can do sports and they will support me but have to continue studies too. I never knew that after sports, I would be drawn to martial arts, then modeling and acting happened. If that day my parents did not make me understand my strengths, I would not have won this National Award nor would I have understood the reason I have it.”

Subsequently, he discloses the reason behind sharing this story with viewers. We all are very well aware of the serious problem of suicide the country is facing; especially youth becomes its victim and that too, for pity reasons, such as failure in an examination or a relationship.

Akshay went on to say,

“I am telling you this story for a reason. I read about suicide cases. In fact, every year almost 8 lakh people kill themselves out of which 2.5 lakhs cases are from India. Most of them are youngsters who commit suicide under pressure of studies or their failed relationship. Why does your life have no value? If you want to do this, give away your life for the country instead. No matter how big is the stress, for once imagine the state of your parents when they would get to know about your suicide. Your parents do not deserve this kind of devastation.” At one fell swoop, he urged parents to give time to their children instead of being busy with their phones or in social media. He said,

“I would like to ask parents, where is the time when you used to talk to your children and ask them about everything? Today, how will your child address his problems to you when you yourself are too busy on your phone and your child is searching for friends on Facebook?”

He concluded in a very touchy manner when he said that parents call a doctor in case of physical illness but they don’t feel the need to consult a doctor as far as mental checkups are concerned. In his words,

“You call for a doctor if they are hurt but if they are stressed or depressed, you just tell them to think positive. Mental help and check up is as necessary as everything else. No matter how much I talk about it, it is you who have to take the decision. Talk to either friends or family. I need the promise that you will search for a solution, which is not suicide. For now, I would just say this.”

This Video Is A Must Watch For Youngster & Parents:

What a brilliant piece of advice! Kudos!

Even World’s Richest Man Bill Gates Loves To Visit India! Check Out His Viral Posts On Facebook & Twitter
This MBBS Student Singing Tum Hi Ho & Shape Of You Mashup Will Make You Dance To Her Tunes