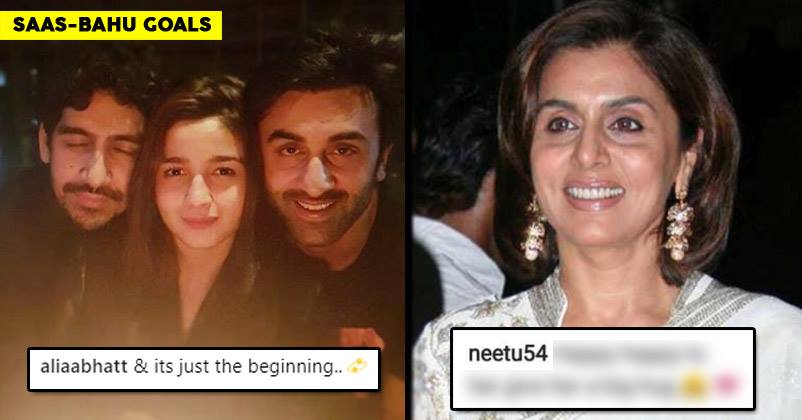 Alia Bhatt and Ranbir Kapoor’s affair is the talk of the town these days. Ranbir Kapoor openly admitted about how their relationship is new and needs time to breathe. Alia Bhatt also blushed when Ranbir’s name was mentioned in front of her at Aap Ki Adalat.

Ranbir and Alia are currently shooting for upcoming big film Brahmastra together. Reportedly, they developed feelings for each other on the sets of Brahmastra only. Along with Ranbir, Alia is also bonding with his mother Neetu Kapoor.

Both of them struck a bond when Alia celebrated her Birthday in March on the sets of Brahmastra. The pictures of Alia Bhatt and Neetu Kapoor created waves on the social media. And these days, the comments of Neetu on Alia Bhatt’s Instagram posts have become the talk of the town.

Neetu Kapoor often does it and it never goes unnoticed. It happened first when Alia Bhatt posted a picture with Ayan Mukerji and Ranbir Kapoor on Instagram. She wrote-

Neetu Kapoor posted “heart emojis” as a comment on this pic.

And recently Alia Bhatt wished a Happy Birthday to her friend and celebrity makeup artist Puneet B Saini.

Now that’s what we call “Being a perfect saas bahu”.