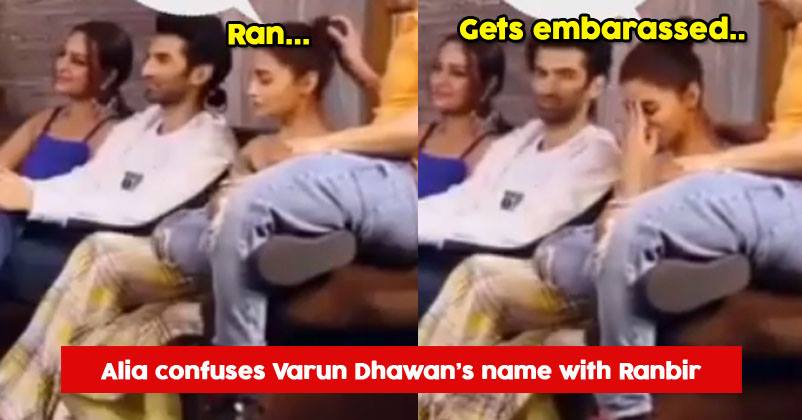 Alia Bhatt and Ranbir Kapoor make one of the most adorable and lovely couples of Bollywood and there is no doubt that they look amazing together. Many times they have left everyone awestruck with their PDAs and their fans just love it. In fact recently in an awards function also, they both showered love at each other and made no attempts to hide that they are madly in love.

The “Raazi” actress is presently busy in the promotions of her upcoming movie “Kalank” in which she is once again paired with Varun Dhawan and apart from them, Sanjay Dutt, Madhuri Dixit, Aditya Roy Kapur and Sonakshi Sinha will also be seen in prominent roles in the flick.

During one of the interview which Alia attended with the star cast of “Kalank”, Varun was troubling Alia by touching her hair bun. She wanted to stop him but mistakenly called Varun as Ranbir. Alia was heard saying, “Ran … umm, Varun don’t”.

Soon after this, everyone started laughing while she was left embarrassed after realising her mistake.

The manner in which Alia was going to take Ranbir’s name shows how much she thinks about him, doesn’t it?

Their love blossomed during the shooting of “Brahmastra” in which they have worked together for the first time. The movie is directed by Ayan Mukerji and it is being made under the banner of Dharma Productions.

Hopefully, this love story will have a happy ending and not separation. What do you say?