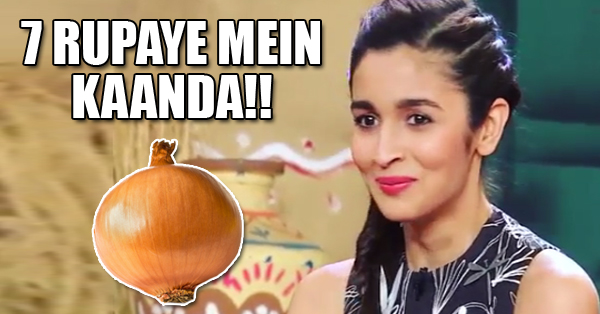 Ladies and Gentlemen, Alia Bhatt did it again! After being socially thrashed because of her low level IQ on Koffee With Karan few years back. This time Alia Bhatt did it on the set of Comedy Nights With Kapil. It was when Alia and Shahid Kapoor visited the sets of CNWK for promoting their movie “Shaandaar”. Like always the host of the show Kapil Sharma decided to pull Alia’s leg when he asked if she know the current price of Onions, which she replied confidently as 7 rupees. Her co-actor Shahid Kapoor jumped in the conversation after hearing her answer and said “Bhajiwalas will leave the country if they were to sell onions at that price”. Alia then instantly changes her answer to 17 rupees per kilo which might have been correct if this was 1950s.

You can see the clip where Alia Thinks Onions Are Just 7 Rupees per Kilo.

Must watch! You will die laughing after watching this hilarious clip of @aliaabhatt @shahidkapoor #Comedynightswithkapil

Prank on Rapper GONE Extremely WRONG! Prankster Beaten Up
Epic Bomb In Public Prank Which Scared The Sh*t Out Of People!!