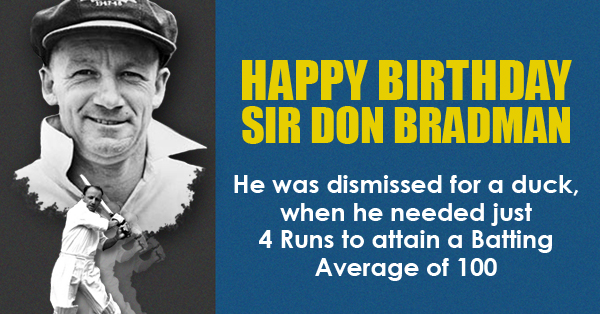 Its the day when back in Early 1900’s a legend was born. A legend who contributed so much to the cricketing world. Happy Birthday SIR DONALD BRADMAN!!
Sir Don Bradman’s was born on 27th August 1908. His real name was Donald Geroge Bradman. He was a legendary Australian batsman who till now is considered to be the greatest batsman in the cricketing history. With records piling up on his name he achieved the most beautiful and stunning average in the test career which is impossible for any cricketer to break. It was 99.94 which is considered as his major achievement as a sportsperson. But do you know that this Cricket legend has learnt to bat by hitting a golf ball with a cricket bat against a tank stand?? Today on his 107th Birth Anniversary we bring you some of the unknown and astonishing facts about this legend who has been idol to many Legendary cricketers currently. Have a look at these amazing figures which show the class he had:

He was not an ordinary man with ordinary class.. He the Class himself, which cricketers now follow. Sachin Tendulkar once said “I THINK THE BEST COMPLIMENT TO ME WAS FROM SIR DON BRADMAN WHEN HE ANNOUNCED HIS ALL TIME TESTS XI & I WAS A PART OF THAT SQUAD”.