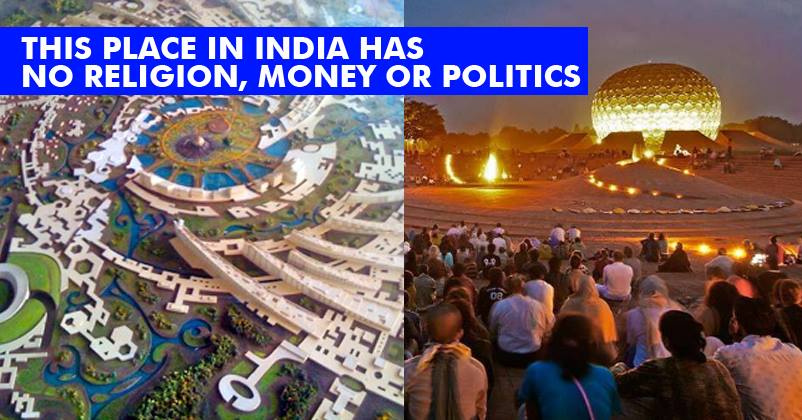 In a world where hatred is being spread in the name of religion, people are engaging in cut-throat competition to acquire more wealth and dirty politics is harming the cultural harmony of the society, there is a town in India where no religion is being practiced, there is no transaction of money among the citizens of the town and politics is completely missing from the society. Sounds amazing and unbelievable but true!

The name of this town is Auroville and it was founded by Mirra Alfassa, the spiritual coordinator of Sri Aurobindo, on 28th February, 1968 under a project conducted by Sri Aurobindo Society.

This unique town is situated in Viluppuram district which is near Puduchery and is developed on the notion of Sri Aurobindo, “man is a transitional being”. The vision of developing this town was to make it possible for people from different countries and different religion to live together with love and affection, untouched from the concepts of religion, money and politics. It was firm belief of Mirra that the town like Auroville will definitely strengthen the humanity and it will be very helpful in making the world a better place to live in for the future generations.

The total population of Auroville at present is 2,400 which comprises of people from 50 countries, belonging to different cultures, background and age. Auroville doesn’t belong to any person or community; it belongs only to the humanity. There is a spiritual centre by the name of “Matrimandir” where everyone can practice yoga and other activities. There is no hierarchy system in the town; it is run by an assembly which comprises of adult citizens of different nationalities. As per Mirra, no money transaction is being conducted among the citizens of the town; however, money is used to make transactions with the outer world. “It is only with the outside world that Auroville has money relations. Money will be no more the Sovereign Lord; individual value will have a greater importance than the value due to material wealth and social position.” Auroville is a flourishing township as it has its own planning bureau which plays an important role in setting up industries, farmhouses, research institutes, auditoriums and restaurants. The citizens of the town also have an email network (auronet) for communication purposes. Doesn’t it sound amazing? How great would it be if the whole country converts into a place like Auroville! What do you say? Let us know your views in this connection in the comments section below.