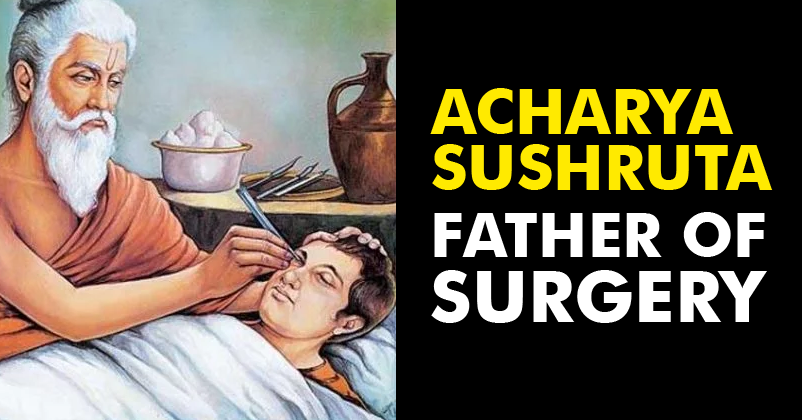 Great ancient Indian saint Acharya Charaka is known as Father of Medicine. He wrote the book “Charaka Samhita” that describes the cure of every disease which modern science failed to understand. When whole Europe was confused with the science of anatomy, Acharya Charaka gave perfect theory that described human anatomy, embryology, pharmacology, blood circulation and diseases like diabetes, tuberculosis, heart disease, etc. Kapil muni was born with great intellect and spiritual powers. The term “Meditation” was first described by him only. According to his book “Sankhya Darshan”, Meditation is the state of mind which remains without any subjectivity/objectivity i.e. without any thought. According to him, there is a direct connection of our mind with the supreme God. And the source of world is Prakriti (fundamental nature).

Patanjali: The father of Yoga The science of Yoga is one of the most important contributions of India to the world. It provides both physical and mental stability and strength. Acharya Patanjali prescribed the control of prana (life breath) as the means to control the body, mind and soul. Yoga is the ultimate practice for good health and inner happiness. It helps in proper functioning of respiratory, circulatory, nervous, digestive and endocrine systems and many other organs of the body. Aryabhatt is considered as great mathematician and astrologer. He was born in 476 CE in Kusumpur (Bihar). He wrote an encyclopedia of mathematics called “Aryabhatiyam”. He formulated the process of calculating the motion of planets and the time of eclipses. Aryabhatt was the first to proclaim that the earth is round, it rotates on its axis, orbits the sun and is suspended in space – 1,000 years before Copernicus published his heliocentric theory. Acharya Sushruta is known as Father of Surgery. 2600 years ago, he and health scientists of his time conducted complicated surgeries like cesareans, cataract, artificial limbs, Rhinoplasty (restoration of a damaged nose), 12 types of fractures, 6 types of dislocations, urinary stones and even plastic surgery and brain surgery. The usage of anesthesia was also well known at that time. He also wrote a book called “Sushruta Samhita”, in which he describes over 300 surgical procedures and 125 surgical instruments.

There were many ancient Indian saints who did amazing discoveries which were later rediscovered by many other modern scientists. There were even proofs of usage of nuclear weapons during Mahabharata which clearly describes a catastrophic blast that rocked the continent. We are so busy in praising the western culture that we don’t know anything about these great saints.

10 Weirdest New Year Traditions From Around The World! We Bet You Don’t Know Them!
Mysterious Places In India That Contain Many Buried Secrets! Have You Been There?