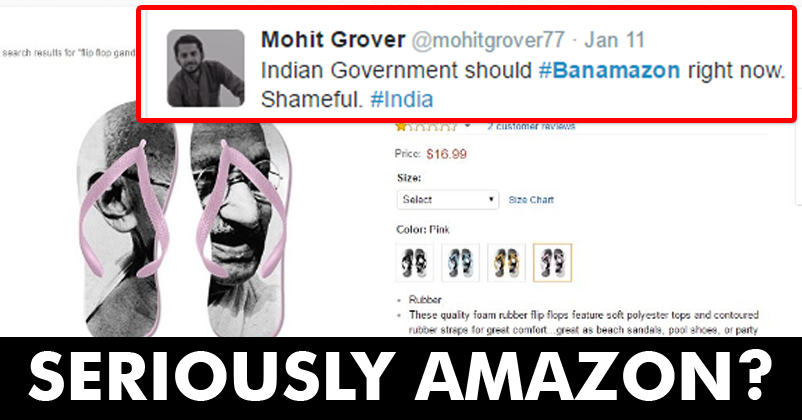 Seems like the tough time of Amazon hasn’t yet faded away. Recently they found themselves in the pit of criticism, shame and embarrassment when the foreign minister of our country – Sushma Swaraj directly confronted them in front of the whole world for selling Indian Flag printed doormats on their website in the country CANADA. However, they are again back in yet another news for all wrong reasons. This time it’s the AMAZON in the USA. The e-commerce giant is now seen selling Mahatma Gandhi printed flip-flop on its website for $16.99. What is more shameful is the fact that they have even described their product as a”foam rubber flip flops” with a “professionally printed” Gandhi face on it. The picture came to notice when a few twitter users reported this on social media site with these tweets.

And despite so much ruckus, the Gandhi Chappals are still on Amazon
Can we see #BanAmazon trending???
https://t.co/MIEsNZ3m6q

It's an Insult of FATHER of Nation @amazon must remove this Bloody Nonsense immdly@PMOIndia @narendramodi @SushmaSwaraj ..must take action pic.twitter.com/Ck0bCKn9LY

These Mahatma Gandhi based Flip-flops are being sold by the seller named ‘CafePress’ which is owned by Indian Origin guy named Mahesh Jain and if one goes through the list of their items, it can easily be observed that this company had been quite a controversial creator in themselves where they have been selling undergarments having Indian Flag, religious signs on them and degrading them in the name of art.

People on social media have reacted to this with a lot of outrage through a series of tweets against AMAZON USA. Have a look at them.

Without delay ban it….boycott it…not only denial of visa or threat

Ban them in India

We need to shut them down

Govt. should take this as an insult.

Govt shud take it as an insult of d whole country. So Ban it immediately

We don’t want to buy product from AMAZON.

Mam please BAN AMAZON IN INDIA. WE DONT WANT TO BUY PRODUCT FROM IT

Don’t be angry, just boycott them.

Seems like AMAZON guys haven’t learned their lesson and this time it surely doesn’t seem like there will be any need for an apology, since the warning that was given by Sushma Swaraj wasn’t meant just for a fling. It will be interesting to see how the AMAZON USA will react to this outrage by Indians and how Sushma Swaraj will react to the the whole scenario, despite of her warning to them.