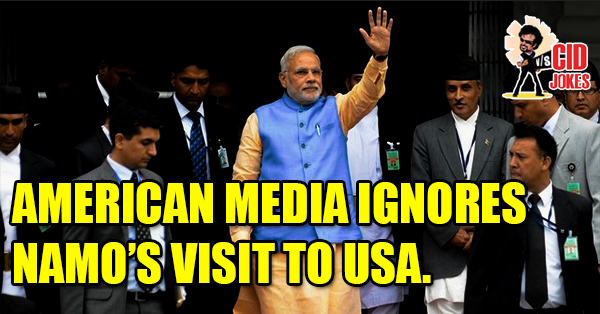 Indian Prime Minister Narendra Modi is always Attracting Media Wherever he Is.. He has that calm and that Professional Attitude that he carries with him.Currently he is on his 6 day long visit to the Unites States.His main agenda is to Promote And Attract Americans in Digital India innitiative.He Met CEO’s of Top Most Companies of USA , He Visited the Tesla Motor Car plant , He Met The Chineese President Jinping XI and many others..

In Indian Media and Newspapers there’s a lot of Buzz on His Current USA Visit.. But the Things seems to completely Indifferent in America. USA’s major newspapers don’t have anything on this to be mentioned as Headline..

Even though there were a few stories buried deep inside the papers here and there about the Modi visit, they remained absent on the front page of any Reputed American Newspaper. While the Pope’s visit to the US captured the attention of almost all media editors and writers , the stampede in Mecca also was put up as a front page story in most of them. Modi is scheduled to visit the headquarters of World Famous Tech Companies like Google and Facebook after which he is supposed to meet POTUS Barrack Obama on the sidelines of the UN General Assembly on Monday.