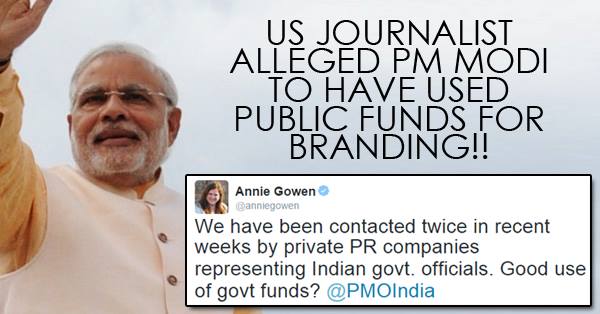 Annie Gowen, the Indian Bureau Chief of The Washington Post shared information on twitter on 27th November saying that the private PR companies who portrayed themselves as Indian government officials have approached them in the last few weeks, at least two times.

We have been contacted twice in recent weeks by private PR companies representing Indian govt. officials. Good use of govt funds? @PMOIndia

After this information was tweeted on twitter, social media was abuzz with criticism of Modi government as it seems misuse of funds for glorifying their image.

There is no denying the fact that PM Modi is well aware of good PR skills and the importance of social media. If the media reports are to be believed, advertising agency Soho Square was hired by BJP in 2014 General Elections for making and running TV, Print and Radio campaigns.

In the same manner, a musical video of party anthem, which was written by Prasoon joshi, was also released. Three graphic designers from Pune were also hired to make ads for telecasting them in T-20 World Cup. Sushil Goswami, advertising professional from Delhi was also roped in for making the second instalment of TV and radio ads for the party.

All this proves that BJP and PM Modi are well aware of good PR skills, which has also played an important role in their victory in 2014 Lok Sabha Elections.

But this tweet by Annie raises some serious concerns in regards to the working of Indian government as to how much sensible it is to use government funds on PR firms. Just recently, AAP government in Delhi was under fire for spending public funds on their own advertisements.

Now You Can Slap Aamir Khan Virtually On Internet..!!
Russia’s MP Was “Having S*X” Inside Car When Bomb Blasted