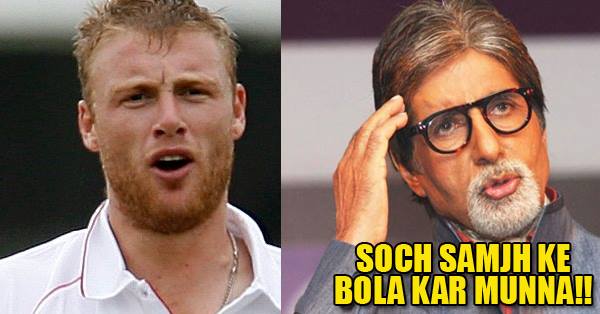 We all know Andrew Flintoff from the famous Natwest series shirtless celebrations of Saurav Ganguly. Andrew Flintoff is the same guy who provoked Yuvraj Singh to hit six sixes. So you can imagine how unhappy Flintoff is with the performance of Indian team. Just to dig at Virat Kohli’s recent 82 runs match winning innings, Flintoff tweeted this:-

At this rate @imVkohli will be as good as @root66 one day ! Not sure who @englandcricket will meet in the final now !

He also mentioned that England gonna reach finals for sure and let’s see whether we play India or WI in finals. First Semis is on 30th March between England vs New Zealand while second semifinal match is between India and West Indies on 31st March.

Big B “the DON” didn’t like this overconfidence attitude of Andrew Flintoff and replied this:-

Root who? We will uproot Root!

We all know when Amitabh Bachchan is in angry mood, then no one can speak in front of him!!