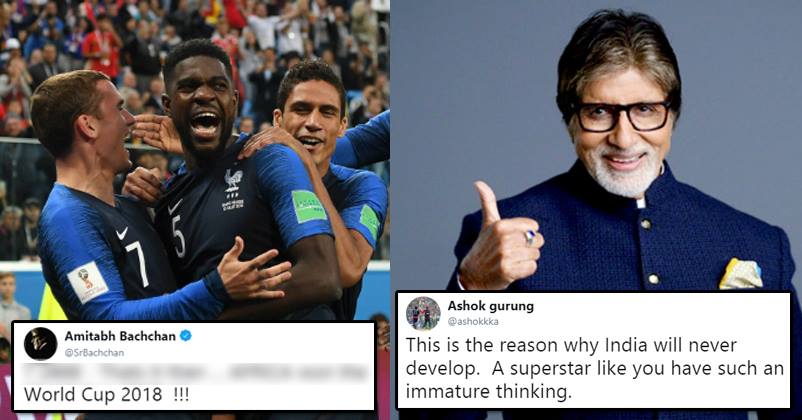 The biggest tournament of football came to an end with France winning the FIFA Football World Cup 2018 after defeating Croatia in the finals by 4-2. It was in 1998 when France became the world champion last time and now once again after 20 years, it has shown its supremacy to the world. 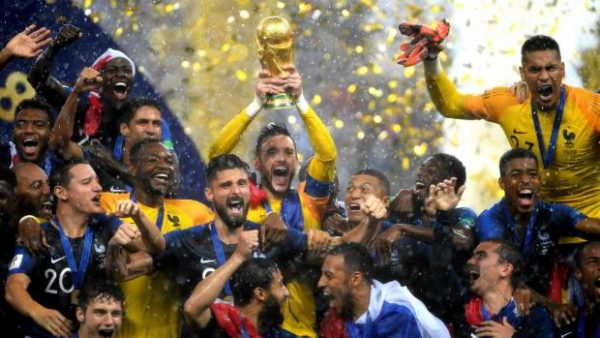 Mario Mandzukic, the Croatian footballer, will definitely like to wipe off this match from his memory as he became the first player to score an own goal in the World Cup finals. The remaining three goals for France were scored by Antoine Griezmann, Paul Pogba and Kylian Mbappe, making sure that Les Bleus goes home with the trophy.

Many people and celebrities including Indian actor Amitabh Bachchan took to Twitter to congratulate the France team, however Big B’s tweet didn’t go well with the netizens.

16 out of 23 players of the France team have their roots in African countries like Morocco, Angola, Cameroon, etc., which means that they have immigrant background. Amitabh Bachchan’s tweet was a dig at the fact that the team is composed by the majority of players of immigrant background and fans got a little angry with this attitude of their favourite star.

This is how Twitterati slammed Big B for his racist tweet:

With all due respect to you, that was an uncalled for statement. May be their forefathers were African, but they all were FRENCH.
Scientifically even our forefathers were AFRICAN as that's where Homo sapiens evolved 300,000 years ago.
Thanks,
A big fan of yours.

Such a cheap comment Ji…Didn’t expect this from u…. gotta give credit to a country that can unite so many immigrants…

You too sir ?? Same comment. Whyyy..??? It's a country with diverse people. Like India. Next time we will also say it's Assam who won the gold not India. Because hima belongs to Assam and tht is our mentality. Tweet Not appreciated

They could only win because they consider France as their nation. Why r we dividing them ?? Let us keep the spirit of game and not these divisions …..

This is the reason why India will never develop. A superstar like you have such an immature thinking.

Cheapness and nothing else but cheapness. Sorry that racist tweet was not necessary. Humor can be in other forms also.

Didn’t expect this Tweet from Big B. If a nation could integrate their immigrants to the mainstream of society so successfully, it’s a huge credit to them.

Bollywood people try to live the european way but the thinking is still backward.

In 1998 when France won the World Cup, then also such comments were made as the key players Zinedine Zidane and Lillian Thuram were of immigrant background and had to bear racist comments. However, the good thing was that after the team won, it was referred to as the “Rainbow team” with the popular slogan of “black, blanc, beur (Black, white, Arab).”

The same thing is happening again but we feel that this time also, the team’s win will promote unity in diversity.