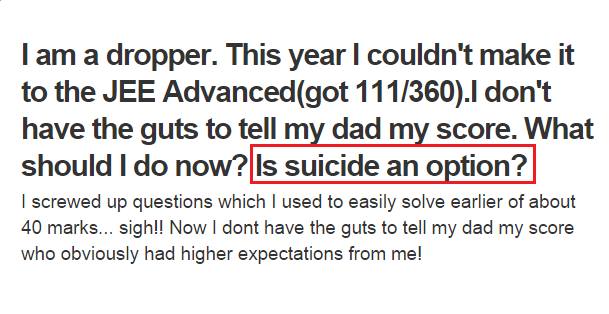 We as kids commit many mistakes and quite often are afraid to tell this to our parents, probably because they will scold us. But it’s only when we reach their age, we get to realize the essential fact that all their scolding was just for our good and benefit. Also there are times when children think of ending up their life just because of a failure or due to a blunder which they believe their parents won’t forgive. There is one such case of an IIT aspirant who could not succeed and hence, the dropper thought of ending his life. Just for seeking advice, he posted the below question on Quora:

Arpit Kubadia gave the best answer to the question by means of an emotional story, which is true also, wherein he summarized that people do care and some of people’s choices don’t just affect them.

Here is the detailed story and although it’s long, you must read it:

“I’ll tell you a story

You come home after getting your results . It was really horrible (or you think so) . You’re just ready to give up.

So you go to your room, close the door, and write down  a suicide note

You take out those razor blades, and cut for the very last time.

You grab that bottle of pills and take them all. Laying down, holding the letter to your chest, you close your eyes for the very last time.

A few hours later, your little brother knocks on your door to come tell you that the dinner is ready. You don’t answer, so he walks in. All he sees is you laying on your bed, so he thinks you’re asleep.

He tells this to your mom.

Your mom goes to your room to wake you up. She notices something is odd. She grabs the paper in your hand and reads it.

Sobbing, she tries to wake you up.

Your brother, so confused, runs to go tell Dad that “Mummy is crying and sissy won’t wake up.”

Your dad runs to your room.

He looks at your mom, crying, holding the letter to her chest, sitting next to your lifeless body. It hits him, what’s going on, and he screams. He screams and throws something at the wall. And then, falling to his knees, he starts to cry.

Your mom crawls over to him, and they sit there, holding each other, crying, weeping with tears.

The next day at school, there’s an announcement. The principal tells everyone about your suicide. It takes a few seconds for it to sink in, and once it does, everyone goes silent.

Your teachers think they were too hard on you.

Those mean popular girls, they think of all the rubbish things they’ve said to you.

That boy that used to tease you and call you names, he can’t help but hate himself for never telling you how beautiful you really are.

Your ex boyfriend, the one that you told everything to, that broke up with you… He can’t handle it. He breaks down and starts crying, and goes out of the school.

Your friends? They’re sobbing too, wondering how they could never see that anything was wrong, wishing they could have helped you before it was too late.

And your best friend? She’s in shock.

She can’t believe it.

She knew what you were going through, but she never thought it would get that bad.

Bad enough for you to end it.

She can’t cry, she can’t feel anything. She stands up, walks out of the classroom, and just sinks to the floor.

Shaking, screaming, but no tears coming out.

It’s a few days later, at your funeral. The whole town came.

Everyone knew you, that girl with the bright smile and bubbly personality.

The one that was always there for them, the shoulder to cry on.

Lots of people talk about all the good memories they had with you, there were a lot.

Your parents just said you died. It hurts him, a lot.

You were his big sister, you were supposed to always be there for him.

Your best friend, she stays strong through the entire service, but as soon as they start lowering your casket into the ground, she just loses it. She cries and cries and doesn’t stop for days.

It’s two years later. The whole school talks to a counsellor therapist at least once a week.

Your teachers all quit their job.

That boy that used to tease you cuts himself.

Your ex boyfriend doesn’t know how to love any more and just sleeps around with girls.

Your friends all go into depression.

Your best friend? She tried to kill herself.

She didn’t succeed like you did, but she tried.

Your brother? He finally found out the truth about your death.

He self harms, he cries at night, he does exactly what you did for years leading up to your suicide.

Your parents? Their marriage fell apart.

Your dad became a workaholic to distract himself from your death.

Your mom got diagnosed with depression and just lays in bed all day.

You may not think so, but they do.

Some of your choices don’t just affect you.

Don’t end your life, you have so much to live for.

Now talking about your father; don’t you think he will prefer a non-IITian child over a dead child?

You will get another chance

He can still come back from this

But there’s no coming back from death

But if he does this.. It will break them.

If he’s willing to deal with this problem.. Not for anyone.. But his parents..

Be honest with him

Life won’t be a breeze now

People will look down at him

And his parents will also be mad in the beginning

But If he succeeds the next time… In anything not necessarily this..

Then all WILL be forgotten”

What a good advice and commendable reply! What would you do now if you get stuck in any such situation? Additionally, would it have been just and right if the dropper committed suicide? How would his parents react if this had taken place? What suggestion will you give him? Share your overall views regarding this IIT aspirant in the comments section!