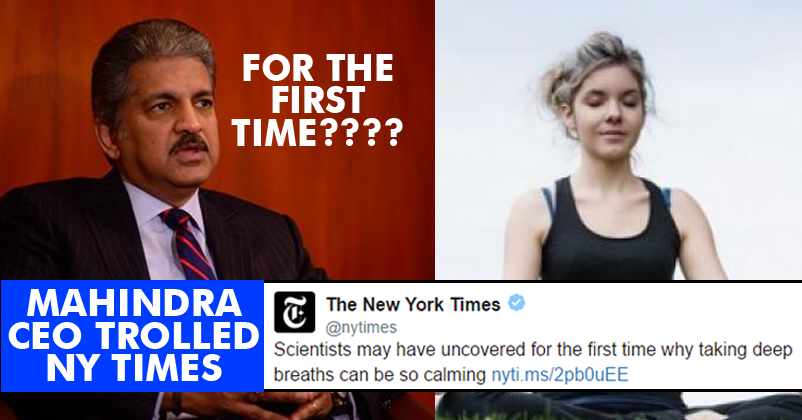 It obviously takes a huge amount of money and time for scientists to research but what has recently come from the scientists of Stanford University popped out eyes of Indians. Well, if you are thinking that it’s some amazing fact or something which we Indians never knew, you are utterly wrong as they, for the first ever time, have discovered that deep breathing is good for health. And guess what, they didn’t carry out this research on humans but mice.. I mean, really?

It took them the hell of a lot time, money and mice to uncover the health benefits of deep breathing which we call “PRANAYAMA” in India. Not only this, we have been knowing why we should do Yoga and Pranayama as well as its advantages since ages.

An entire article was published on it by New York Times which also tweeted it and faced the backlash on Twitter. The New York Times tweeted, “Scientists may have uncovered for the first time why taking deep breaths can be so calming”

Scientists may have uncovered for the first time why taking deep breaths can be so calming https://t.co/ybbonl6rcC

In fact, Anand Mahindra, a business tycoon, couldn’t stop himself from trolling NYT for this. He tweeted, “Really?And no mention of pranayama or Yoga? Does it take Stanford researchers with a lab full of mice to tell you what yogis knew aeons ago?”

Really?And no mention of pranayama or Yoga? Does it take Stanford researchers with a lab full of mice to tell you what yogis knew aeons ago? https://t.co/Z8FD2b4tLM

Well, this was just the beginning! Indians on the micro-blogging site openly thrashed NYT and Stanford University scientists for making this claim! Here are few selected tweets:

Yoga found it 5000 years ago… Your Stanford scientists are finding it now?

Dear morons at @nytimes . It's called Pranayama and it's a part of yoga practiced for ages now!!!

Agree or not, it’s damn true!!

So foolish they are..

NYT comprises of anti-India Presstitutes. They can't give any credit to Indian strength

Well, it’s strange in itself!

Not expected from NYT since it is allergic to Hindus and Ancient Vedic culture. @sameersharmaa @davidfrawleyved @YRDeshmukh

Guy Ditched A Group Trip At End Moment! What His Other Friends Did Is Called The True “Jugaad”!
Media Said You Can Visit Malaysia, Singapore & Thailand On 1 Visa! We’re Here With The Truth!