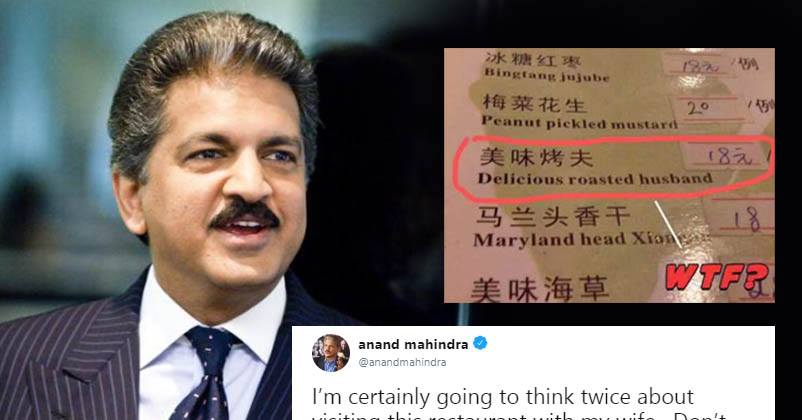 Anand Mahindra is one of the most successful business tycoons of India as he is the chairman of Mahindra group which operates in different sectors such as automotive, agribusiness, aerospace, defence, energy, finance and insurance, information technology and various others.

He has a huge fan following on social media, especially the micro-blogging site Twitter where he is pretty active and shares updates regarding his professional and personal life. Sometimes, he also makes his followers laugh by posting humorous tweets.

Recently, he took to Twitter and posted photo of a menu card of probably a Chinese restaurant which includes a dish that can give nightmares to all the husbands.

The name of the dish is “Delicious Roasted Husband” and Anand Mahindra wrote in his tweet that he will think twice before visiting this restaurant with his wife as he doesn’t want to give her any creative ideas.

First of all, take a look at the pic shared by Anand Mahindra: 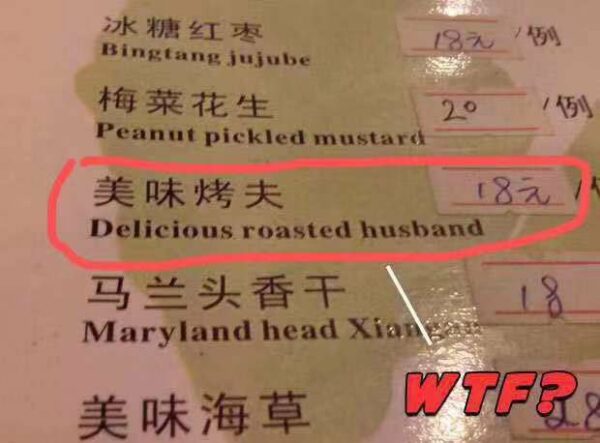 “I’m certainly going to think twice about visiting this restaurant with my wife.  Don’t want her getting any creative ideas….!  😀 #whatsappwonderbox”

I’m certainly going to think twice about visiting this restaurant with my wife. Don’t want her getting any creative ideas….! 😀 #whatsappwonderbox pic.twitter.com/nyoGOBGo35

She will eat it and say "Anand hi Anand hai"

Well!! Mr Mahindra all of us(husbands) get roasted day in day out by our wifes ,at least one brave husband has dared to put it on menu 😂

The price is quite affordable too.🙏 Not sure if its main course ,starter or an appetizer😁

Sir, Indian wives are creative by birth and they know how to roast their husbands without even burning smell. Doesn't matter for them what status or position their husbands hold. They have enormous #streeshakti

This item will be a top selling item in ladies party.

In fact all husbands in India are roasted! 😄😆

But doesn't the wife roasts the husband daily and finds it delicious ? Literally if not actually…

Will need to get my hands on Mrs Mahindra’s twitter handle.. First your tweet was about good night Deer and now it’s about Delicious Roasted Husband…. Hmmmm.. Something is cooking 😉

😁 She will be disappointed for not trying that dish…..She will definitely love it I guess..

Well whatever kind of dish it may be, one thing is certain that husbands won’t like to order or eat it. But what the reaction of wives will be on this matter is something we will love to know.

People Asked Google ‘Will You Marry Me’. When Google Asked Why, People Gave The Funniest Answers.
Trump Wrote Global ‘Waming’ Instead Of ‘Warming’ & Asked It To Come Back Fast, Got Trolled Heavily