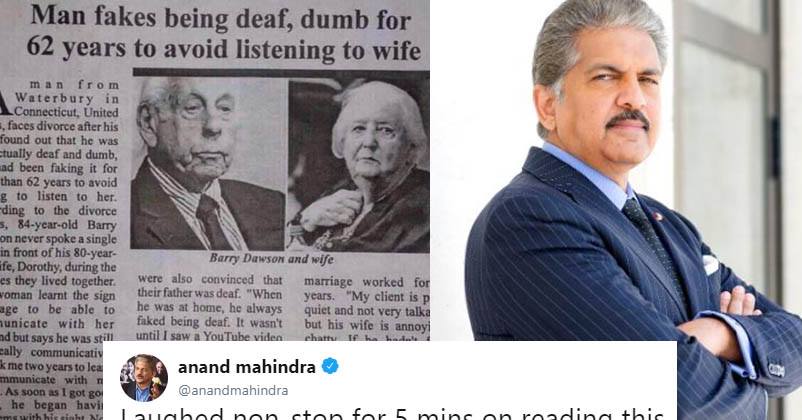 Anand Mahindra, the chairman of the Mahindra group, is pretty active on social media and keeps on posting updates about his professional and personal lives on a regular basis. Not only this, if he finds something interesting, catchy or motivational, he doesn’t forget to share it with his followers on social media, especially on the micro-blogging site Twitter.

Recently he stumbled upon a piece of news from abroad as per which a husband faked being dumb and deaf for 62 years so that he could avoid listening to his wife.

Anand Mahindra not only shared this article but also talked about his wife’s smartness and told how her smartness is detrimental to him. 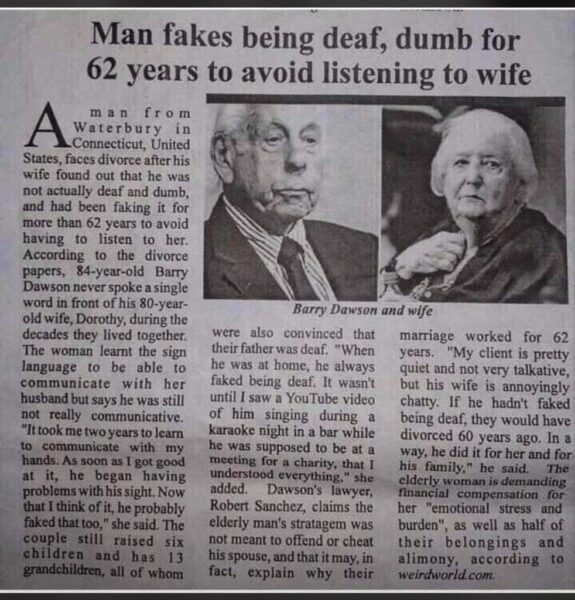 He said that he laughed for five minutes after reading this article and then he asked his wife whether he could have fooled her like this. To this, her reply was bang on and made him realise that he is married to a pretty smart woman.

Here is what Anand Mahindra tweeted with the image, “Laughed non-stop for 5 mins on reading this. Asked my wife if I could have fooled her like this. She didn’t waste even a few seconds in replying: She said “Really? Would you have lasted 5 mins without speaking into your cellphone?” Aah, the perils of having a smart wife!”

Laughed non-stop for 5 mins on reading this. Asked my wife if I could have fooled her like this. She didn’t waste even a few seconds in replying: She said “Really? Would you have lasted 5 mins without speaking into your cellphone?” Aah, the perils of having a smart wife! pic.twitter.com/msWJLbB1ZD

The tweet has gone viral as it has been retweeted for more than 4K times and received over 19K likes.

Did he get the Oscar? He couldn’t have accepted it, as he would have to deliver a ‘speech’. 😁

I wish I had read this 13 years ago ..now my wife knows I can listen n talk 🙂

He should be given a life time achievement award 😉

Don't know how many secrets he got to knew while his wife was murmuring or talking slowly..

holy moly, this is the fear of wives that a man has to deal with. he was so afraid of his wife that he never spoke a word to his wife and agreed in her every decision. i salute you😂😂😂😂🤣🤣🤣🤣🤣🤣😂🤓🤓🤓

How could he do that for so long..?? Hats off for his determination and will power sir.

Well if this is true, I wonder how that man managed to do it for 62 long years!

14 Pictures Of Our Sasta Jugaad Man Will Make You Cry With Laughter
Twitter Compares New Rs 20 Note With Aam Panna, Dew & Modi’s Dress. Memes Are Too Funny To Miss