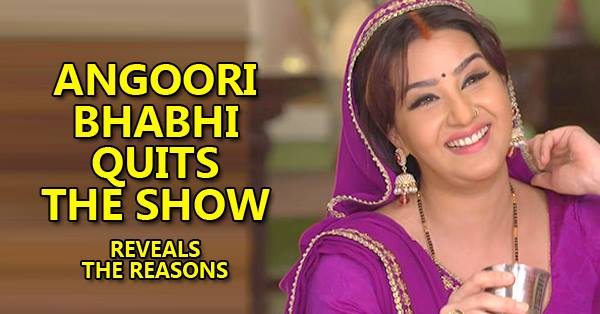 There are very few shows which touch our hearts and stay with us even after they are over… The serial which was started just a few months ago, “Bhabhi ji ghar me hai” came and has conquered our hearts. But the character of Shilpa Shinde aka Angoori, is here to stay with us for a very long time.. Sad part is she had to leave the show midway, citing the reasons of how unprofessional the show makers have been towards her. She made some shocking revelations which made us question how glamorous the industry actually is..

1. On Quitting The Show

That Bhabhi ji has left the show is a known fact now. But the reason for her leaving is uncertain yet… But Shilpa Shinde came out in open and stated that the show makers tried to tie the actor with a contract which chained the creative limits and restrained them from signing any show with any other channel, which truly is unjustified. So, Shilpa blatantly declined to sign the contract as a result of which she was made the scape goat and rumours started doing the rounds that she throws tantrums. 2.On Not Shooting For The Show

Shilpa was given a threat from the show makers to sign the exclusive contract or they will issue a legal suit against her… They even gave her two day off to think about it, even after which she refused to sign the bond, which didn’t go down well with the makers.

Angoori Bhabhi revealed the dual status of the Production House (Edit 2), who would expect actors to write everything in papers but would not agree on anything that has been put on the paper by them. At that time, it doesn’t have any value. Sheer Double Standard. 4. News Of Her Throwing Tantrums

Well this is the most sort after excuse that production house given when they can’t find a replacement on time nor can they work with the existing actor. Shilpa Sinde has good reputation in the industry, she spoke aloud if the production house had a problem with her they could have thrown her out of the show an year before, so these excuses are lame enough.

5. On Demanding A Better Designer

Shilpa Sinde, clearly stated that as an actor her job includes looking good as well… Apart from majorly acting.. This is what fetch them future assignments as well. The designer that the team hired for her used to provide very shabby clothes, all she wanted was to seat with the designer and team and discuss to improvise further. But everybody was least bothered, in fact at times she had to wear her own makeup and clothes, for which she wasn’t even paid. 6. On Not Getting Leave

She underwent a surgery for appendix, after which she got an off for just three days, and luckily one more because of Id, the people are least bothered about actors health, even when she was having infection the shoot wasn’t postponed or managed, she had to give her full time and energy without any appreciation.

“She is a terror on the sets. Benafir mentally tortures actors. Ask the actors who have worked with her. I am planning to file a mental harassment case against her. She is so insecure that she wants everything in writing from the stars. On the other hand, she will not commit to anything.” Said Shilpa Sinde .

All my co-stars and supportive actors know that I am on the right side, and I can totally understand if they don’t come out in open to support because money is an important factor to survive in Mumbai, nobody wishes to take the risk of being broke. The producer might withhold their payments. I am supposed to get my dues of the last three months, I hope they don’t create a hassle and clear is out asap. I Don’t know who is replacing me, All I know is they have to take an NOC from me, before replacing Rashami with me. If they do it without my permission, I will go to CINTAA.

10. On doing the Show with Kapil Sharma

I am hopeful that it will turn into something great, It’s an honour and a great opportunity for any actor. Seriously there is a lot that this industry takes away from a person. more than it gives.

Amazing! Super-Awesome! Wow! Yes, This Is How The Official Teaser Of MS Dhoni – The Untold Story Is
These 15 Photographs Of ‘Masan’ Film Actress Shweta Tripathi Are Too Cute