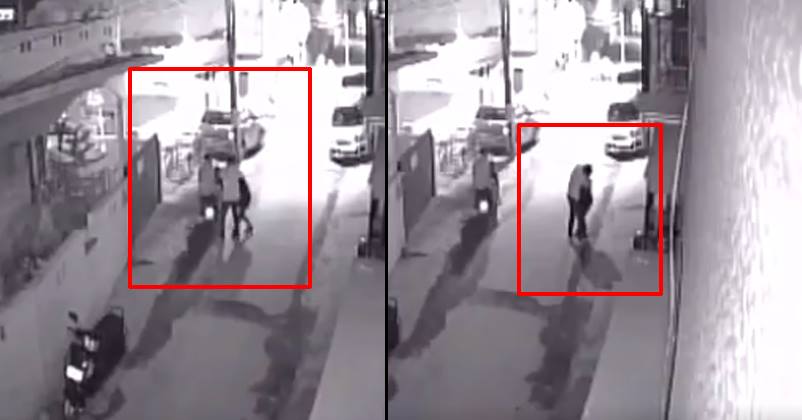 Bengaluru has become one of the most dangerous cities for women in India. Whole country witnessed the news of mass molestation of women on Sunday, and now another girl was molested on the street. This is utter nonsense and law and order has failed completely.

This time whole incident was recorded in a CCTV footage. This footage is of Sunday 2:30 am, where we can clearly see two molesters on the scooter. They misbehaved with that girl and pushed her on the ground.

The woman visited the house near the Kammanahalli 5th Main Road in east Bengaluru, where CCTV camera was installed. But she went there to check if those molesters stole her purse. And she didn’t want to complain to police as the officials are not at all supportive according to her. One of the 2 men grabbed the woman, the moment she got down from the auto; this was around 50 metres away from the house.

The woman even visited the house again on Monday and requested for the CCTV footage. She stated “I don’t know the people who attacked and molested me. It was bad. I realised that my wallet was missing after the incident. I guess they robbed me too.”

The resident of the house said;

“I did not want to remain silent after seeing what happened on our street. I came to know about the incident when the woman came to my house with her friends on Monday, saying that she wanted to view the CCTV footage as she was groped by two youths nearby. What I saw in the video left me disturbed. If residential areas, too, are unsafe for women, where are they supposed to go?” As we all know that Home minister of Bangalore state totally disagreed with the incident of mass molestation. This type of statements from govt. Officials is the reason of discouragement of women in filing complaints against the molesters.

So what’s your view on this? Do share in our comments section below…

Guy Tries Hard To Plan A Good Party With Friends! What Happens Next Is Crazy!
Mamata Wants To “Put Modi In Jail”! PM Modi Shut Her Mouth By Giving The Most Kickass Reply