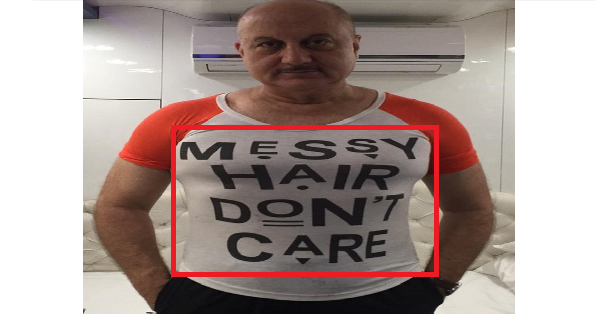 Anupam Kher is one of those actors who don’t want to stereotype themselves and always want to do something non-conventional as well as the one which is never expected from them. In fact, he loves to surprise his fans and audience. So when he posted his pic on twitter, he was in the mood as if “I don’t give a damn”& “I am cool”. He tweeted this pic of his, with a caption on T-shirt which says everything, have a look guys!!

Do I need to say more?:) pic.twitter.com/AYzR02s5bS

This is how Twitter users hilariously reacted to it and trolled Anupam Kher in the most epic way:

@AnupamPkher tell me you were drunk when you posted this.

@AnupamPkher why does the arrow under CARE point downwards ?

@AnupamPkher that's what happens when you buy T-shirt on internet 😂

@AnupamPkher are those men boobs?😂😂

While there were few who praised Anupam Kher for such a courageous post:

How did you find these tweets on the picture of Mr. Kher? Amazing and hilarious, aren’t they? Hope Kiran Kher did not read these comments otherwise only God can save Anupam.

Share your views about it in the comments section below.