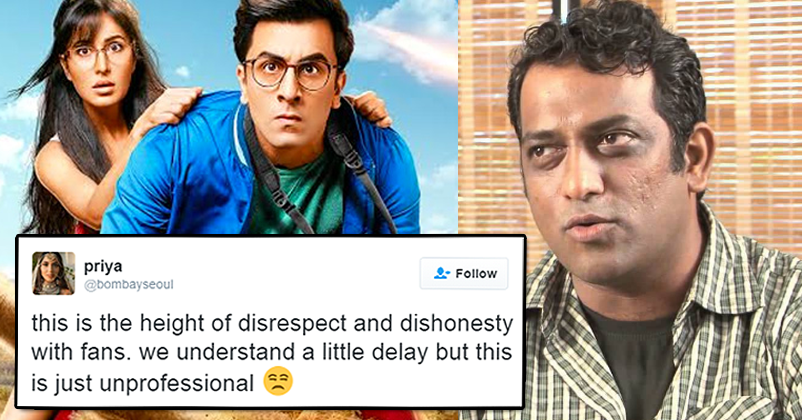 It is always difficult to keep waiting for a movie for years, especially if you are eagerly waiting for it, isn’t it? Similar is the case with Jagga Jasoos, the Katrina Kaif and Ranbir Kapoor starrer. Since 3 years, makers are announcing that it is in making, but when will it finally release? The lead pair has already broken up in this process; moreover, there have been unnecessary delays owing to clashes and unavailability of dates. Finally, Anurag Basu took to Twitter to announce the possibility of delay in the release date; initially, the slot was booked for 7th of April 2017, but it seems there might be a delay once again. This will happen because exams of students have been scheduled between 9th of March to 29th of April owing to state assembly polls.

Since the target audience of Jagga Jasoos is youngsters, makers can’t afford it to release it during exam time. This is the reason why they are searching for a better date now; does this mean that Jagga Jasoos will be further delayed? Well, there are good chances!

But for now team is getting ready for 7th April.

Anurag said that the team is getting ready for the 7th April release but they are seeking a better date; as soon as he tweeted this, a fan expressed her disappointment over this. Check out what she tweeted;

this is the height of disrespect and dishonesty with fans. we understand a little delay but this is just unprofessional 😒 https://t.co/BiTY7EhMbV

Anurag asked Priya to ignore them, but his tone was quite rough…

Sorry to disappoint you..Ignore us ,You will not miss anything in life if you dont watch Jagga Jasoos.

Anurag shouldn’t have asked her to ignore and the way he wrote, shows utter disrespect of fans, isn’t it? as a fan highly anticipating the film, it will be hard to ignore sir. just frustrated with the unreasonable delays

However, Anurag’s tweet didn’t go down well with Twitterati. For them, it was a disrespect to their faith and patience. Check out what other fans had to say…

Understand the love and eagerness!

This tweet is disregarding our patience nd faith.This is really hurtful:'(

really think u should delete this tweet! It is hurtful!
Fans don't support you for this! And it's a two way street!

Fans are right on their part; they have been eagerly waiting since 3 years and now, they are finding it tough to wait more. We understand the frustration level of Anurag Basu too, but he should have replied a bit politely, considering the emotions of a fan. If the makers get a better date, the movie might not release on 7th of April 2017, but if they don’t, the release date would remain the same.

What’s your take on this? Do share in our comments section below.

Varun Said “He Voted Last Year” & People Started Trolling Him! He Had No Option But To Reply Them
This Woman Was Fired From Her Job Because She Was Too Good Looking