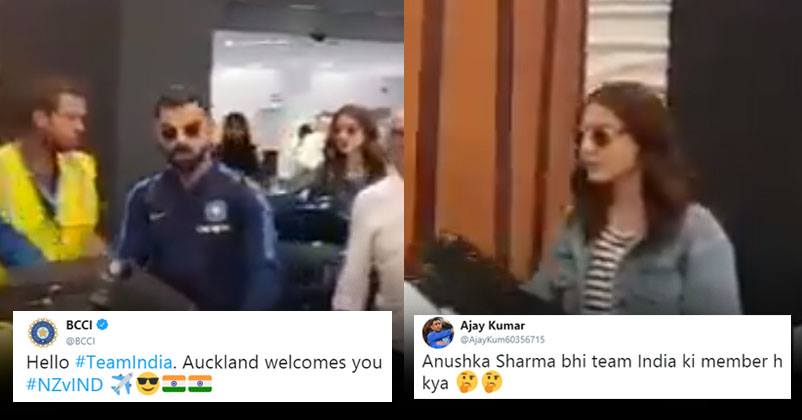 As team India reached Auckland, they were showered with love and appreciation. Our men in blue is there to play against New Zealand. They have a limited series to play for.

They will be there for three weeks, playing three T20 and five ODIs. Amidst all the cheering and support, people strongly opposed Anushka Sharma travelling with the team since Australia.

BCCI proudly posted on their official twitter handle a video, welcoming team India in Auckland. Check out the video.

Check these tweets to see how the netizens reacted. They are funny but is clearly stating the issue as well.

From when Anushka Sharma is part of India. Why are the rules different for Virat. Why other players wives are not allowed to stay with them on tour. This is so unfair.

Alredy she is with team,abi bas playing 11 me hona chahiye😅😅

Anushka Sharma is NOT a member of squad! Why is she there all the time??? As if other players don't have families.😬

Not at all. She should not be there. Let him show love our side cricket environment. Its really bad

dont know abt anybody else but anushka sharma has a guaranteed spot at the world cup!

So, what do you think?

Continue Reading
You may also like...
Related Topics:Anushka Sharma

Amrita Rao Was Once Replaced By A Starkid Without Any Reason, Regretted Not Having A Godfather
Kohli Won All Major Awards At ICC Awards 2018. Fans Flooded Twitter With Best & Funniest Memes