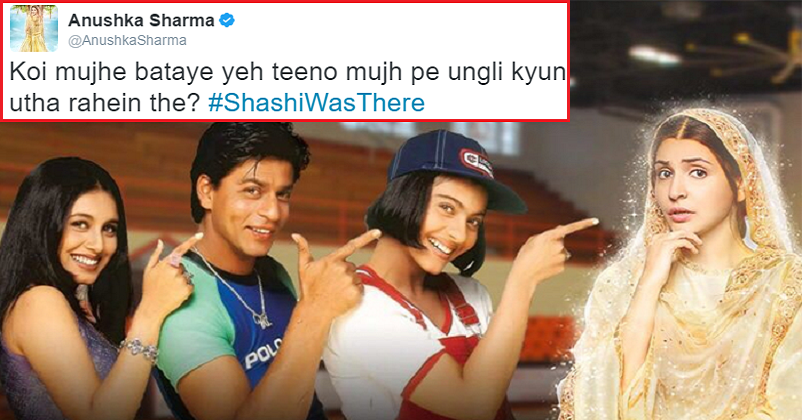 To promote her upcoming movie “Phillauri”, Anushka Sharma has tried some of the most unique ways. Her “Invisible theme” is something which all fans are enjoying. She promoted her film on TV shows and also gave her WhatsApp number to fans, so that Phillauri is marketed in the best possible manner.

Recently, we saw how Anushka tweeted about her presence at Oscars 2017; yes, the actress uploaded a photoshopped picture of “Shashi” being present at the awards ceremony, when the best movie award goof-up happened. If you don’t remember, here’s her tweet…

This was not it; Anushka started enjoying this trick and uploaded one more picture of hers on the moon, along with Neil Armstrong. Check it out…

It seems she still wanted to have some more fun and hence, targeted the movie “Kuch Kuch Hota Hai”, once again, with the hashtag “ShashiWasThere”. She perfectly fit herself in the picture of Rani, SRK & Kajol and asked why the trio is pointing towards her. How witty!

Here’s what she tweeted…

As soon as Karan Johar saw this tweeted, he was prompt enough to reply!

Haha!!!! They knew you would make the film into a big hit!!! They were grateful Shashi!!! #Phillauri https://t.co/CYpPnOyKDF

Ended with a a SHUKRIYA!

With such activities, Anushka is actually making us eager for her movie which is all set to hit the screens on 24th of March. We can’t deny the fact that Anuskha is too good with photo editing, isn’t it? Hope to enjoy with some more morphed pictures like these.