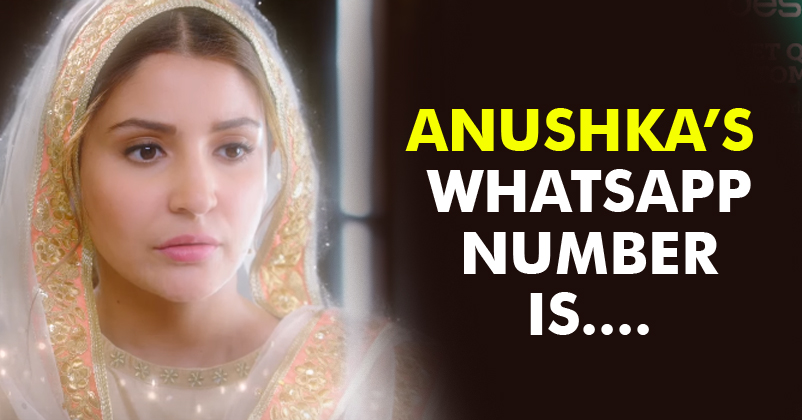 No doubt, filmmakers always try their best to market the movie wonderfully, so that huge profits are earned. However, in case of upcoming movie Phillauri, things are a bit “Hatke”. Yes, the makers have planned something very different and fans are going to have a lovely time. The movie is all set to hit the screens on 24th of March 2017 and Anushka Sharma, the lead actress (Essaying the role of Shashi) is already on a promotion spree. She will interact with the fans every week; but wait, this is not going to happen through Facebook or Twitter, but will happen through WhatsApp. Yes, you got that right; Anushka will be calling up fans and this activity would highlight the factor of “Invisibility” because we all know that Anushka is essaying the role of a friendly spirit (Shashi) in the movie. You can term it as an invisible promotion and this is for the first time in the history of movie promotions that a star will call up fans and interact with them.

“A celebrity going invisible during a film’s promotion is a first and we would like to continue creating ground-breaking ideas that transcend conventional norms of engagement.”

How will this communication take place?

The actress has registered a personal number but in the name of Shashi and not Anushka. Fans can contact her through WhatsApp video calling, superb idea, isn’t it? Now, you might be eager to get her phone number, isn’t it? Well, it’s 9867473178. All you need to do is, save this number, add her to your WhatsApp contact list and you are done! Anushka would be using the same number throughout the campaign so as to interact with fans. Shikha further added,

“For ‘Phillauri’, we have created ideas that are experiential in nature and invoke participation from the target audience. What’s up with Shashi is one such idea on Whatsapp where we tap into the reach of the chatting platform in the country (160 million monthly users) and encourage engagement with Shashi in a never been done before manner.”

This is indeed a great idea and has never been used before; fans are lucky that they will get a chance of directly interacting with Anushka and that too through video calling. So, if you are a big fan of Anushka and have been waiting to get her number since long, this is a golden rather a diamond opportunity.

People actually tried calling her and shared their experiences on Twitter;

I measged her. but she is not replying. what to do… 🙂

already Done!!! And Shashi was onlineee few minutes back😝👻 pic.twitter.com/f1RGwhSdbz

So are you all set for this WhatsApp calling? Do share your views in our comments section below.

12th Day Of Jolly LLB 2 V/S 5th Day Of The Ghazi Attack! Akshay Finally Enters The 100 CRORES CLUB!
Disha Patani Was Trolled For Her Pic On Instagram! She Slammed Body-Shamers With A Powerful Post!