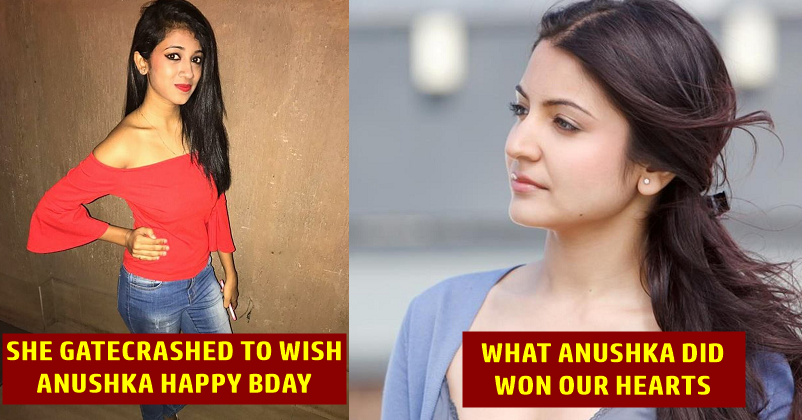 Anushka Sharma celebrated her 29th Birthday on 1st May with close friends and family. The gorgeous Bollywood actress was flooded with wishes on Social Media from fans but there was one who couldn’t satisfy herself with mere wishing.

The said fan proved her madness for Anushka by gatecrashing her residence. As she reached her house and expressed the desire to meet Anushka, guess what she did. Well she welcomed the fan inside her house wholeheartedly, gave her the time and love she must be craving for. Also Anushka received the gift from fan and posed for some lovely photos. The fan posted on Twitter

Happy Birthday @AnushkaSharma ❤
Love you so much
God bless you
1st may is really Very lucky for me ❤#Unforgettablemoment
Hopetoseeyou❤ pic.twitter.com/tU1lBxHWJa

Isn’t that what Fans look for? It’s really great to see that stars like Anushka are above all the stupid tantrum things which celebrities generally throw when they see fans coming their way. If anything, gestures like these make the fan following grow even further and make the bond deeper. Anushka was last seen in Phillauri. Her next is yet Untitled Romantic Film. Starring Shah Rukh Khan opposite her, the film is Directed by Imtiaz Ali and will release on 11th Aug 2017. Anushka is also producing a film titled Pari.

Continue Reading
You may also like...
Related Topics:Anushka Sharma, bollywood

This Is How Famous Baahubali Characters Look Like In Real Life! They Are Way Too Different!
5th Day Collections Of Bahubali 2 Are Out! Hindi Version Is All Set To Enter 200 Crores Club