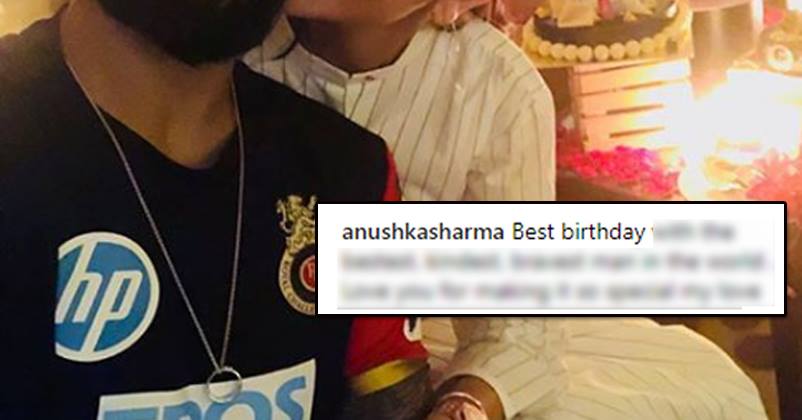 After a long time, RCB won yesterday’s match against Mumbai Indians. The whole Chinnaswamy stadium was elated as Virat finally brought victory to RCB. Twitter thanked him for giving her such a lovely moment on her birthday.

Pics of Anushka with a bright smile on her face went viral on social. She just couldn’t control her excitement and we could see that.

After the match, Anushka couldn’t stop herself from posting a beautiful message for Virat. She took to to Instagram and posted a pic with her love. She called Virat, “Bestest, kindest and bravest man”.

In the morning, Virat had called Anushka as the most “Positive and honest person”, and at night Anushka returned it with such a lovely post.

In the post match presentation, Virat dedicated this win to his lady love. Here’s what Anushka tweeted;

Well, she thanked Virat for making it so special for her. Of course, she referred to yesterday’s victory too.

Continue Reading
You may also like...
Related Topics:Anushka, RCB, Virat

Harsha Bhogle Asked Virat, “Was This Win B’day Gift For Anushka?”. Check What He Replied
12 Gym Freak Actors Who Need To Join Acting Classes Right Now. It Will Make Their Fans Prouder