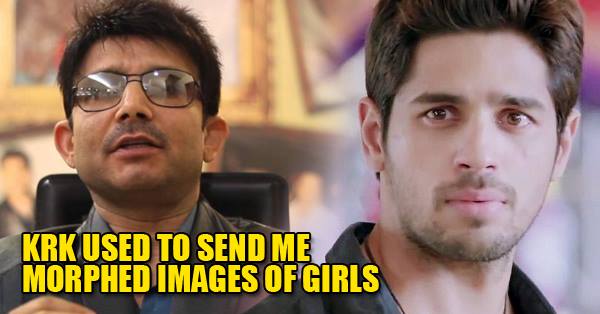 If you think Sidharth Malhotra’s outburst against KRK was only due to nasty comments he passed at Alia on her bikini picture, you are wrong. Sidharth stated that the outburst was owing to many things that were long-stored.
Sidharth reveals that it was a built-up of several things. KRK used to Whatsapp him morphed pics of girls. Then again, he sent him a WhatsApp stating if he felt offended he must tell him. Image Source
Sidharth clarified that the matter was sorted out after KRK sought apology. Basically, Sidharth knows him since the time of Ek Villain. Everything was sorted out. He did apologize for being impulsive, said Sidharth. He further added that he has the right to criticize movies but not pass cheap remarks or go personal.
On her part, Alia was quite happy that Sidharth stood by her side. Alia states that it was sweet of Sidharth to have reacted that way. She further says that she doesn’t even feel the need of paying attention to things said by KRK. Rather, she was not at all aware of what was happening. However, she agrees with Sidharth that he has a right of criticizing movies but not passing such dirty comments against a young girl. Apart from Alia, Sid was also speaking about other girls whom KRK had treated this way.

Padma Lakshmi Reveals Her Painful Journey With Salman Rushdie! Being A Woman, You’ll Be In Tears!
These 15 Pictures Of Javed Jaffery’s Daughter Alaviaa Jaaferi Prove Her To Be Perfect For Bollywood