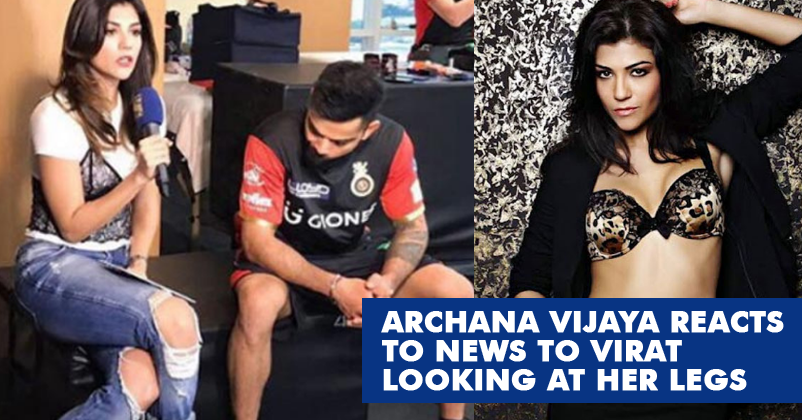 Media’s hunger for sensationalism is not a new concept at all but it’s getting worse with time. Gone are the days when news headlines used to give an idea about the actual information, today they mislead shamelessly.

Another case of this shameless journalism is now in front of the public when the news of Virat Kohli staring at IPL host Archana Vijaya’s ripped jeans during Interview proved to be wrong. And the one who has called off the news is none other than Archana herself.

During a recent interview with India Today, Archana revealed that Virat Kohli was not looking at her jeans but was trying to steal a look at the cue cards. Here’s what she said;

“My first thought was: Oh my God, are people trying that hard to make headlines? Are people so starved to bring people down?”

She further informed that they were playing a round of rapid fire and Virat was just to trying to cheat by looking at the cards;

“We were playing a round of rapid fire and the poor guy was just trying to cheat by looking at the cue card. It was the cue card he was looking at,”

Praising Virat Kohli for the growth he has shown as a cricketer she said,

“Virat has had such a remarkable growth as a cricketer. We all admire his amazing discipline. He has such clarity of thought and look at what people did.”

Archana also talked about the relationship she shares with Virat,

“When he saw me, he asked, ‘Dude, where were you last year? Welcome back!’ That’s the sort of ease we have.”

She showed her disappointment regarding some genuine news outlets also sharing the wrong information. On this, Archana added,

“The most disappointing thing about the whole episode was that serious news outlets covered it. It trivialises journalism.”

So when it’s all clear and we know what exactly happened what are your thoughts on the case?

Don’t you think these big media houses should at least check facts before playing with someone’s image?

Watch Video: Kings XI Punjab Players Play A Prank On Preity Zinta & Troll Her In An Epic Way!
Indian Cricket Team’s New Jersey Is Unveiled And How Much It Cost The Sponsors Will Give You A Shock