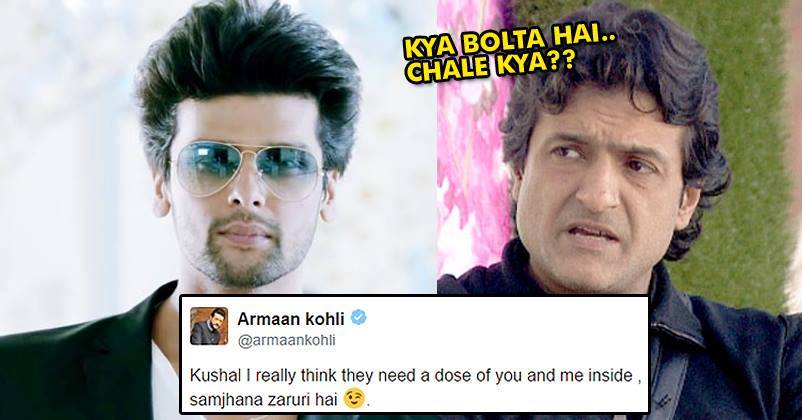 It is the celebrities who should be dominating and arrogant but it is strange to see how they are quite and sweet and are being dominated by their counterparts. However, there are 2 people who just can’t see the troubles that Indiawale contestants are creating to these celebs and they are none other than Kushal Tandon and Armaan Kohli. Well, they were the contestants of Bigg Boss 7 if you remember. Yesterday, during the luxury budget task, Indiawale created great hassles for celebs and due to this, their blood started boiling. Now, they both took to Twitter and expressed their desire to return to the Bigg Boss House to set those people straight; but wait! Are they actually going to return or this is just that TRP game? Have a look at their tweets…

First, it was Kushal Tandon who started and then he was joined by Armaan!

Is mannu ko tho main marongha …. If ever I c his face 😡Coz he has BMW 4 series .. Areee bhai there is no series called 4 series in BMW 🙄

Armaan says, they need a dose!

Kushal I really think they need a dose of you and me inside , samjhana zaruri hai 😉. https://t.co/LBYP3KVzol

We really don’t know what is going to happen next! Bigg Boss 7 was definitely very entertaining; it had every element be it ‘Love’, ‘Friendship’, and it seems those celebs aren’t able to digest such a drastic difference in this season. Let us wait and watch! What do you think about this? Would they re-enter? Do share your views in our comments section below!

Deepika’s BADASS Reply To The Break-Up Rumours With Ranveer Will Make You Love Her MORE!!!
5 Practical & Logical Reasons To Watch Shivaay Over Ae Dil Hai Mushkil! We Are NOT BIASED!