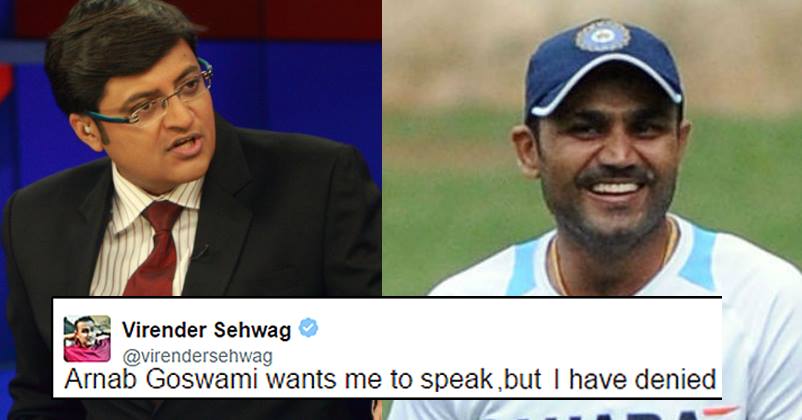 If the Nation’s most wittiest sportsman could meet the Nation’s most hilarious TV Journalist, the fun and humour was bound to get double. Recently we came up with this article where Virender Sehwag Took An Indirect Dig At Piers Morgan With His Tweet which were totally Amazing!. And following this Twitter battle, Arnab Goswami made sure to churn the best out of it. Arnab Goswami is always the man of the moment and never leaves a single opportunity to roast up the already roasted one. After Piers Morgan mocking the performance of Indian Athletes in Rio Olympics and instead getting trolled by million of people for his complete ridiculous tweet, Arnab Goswami decided to kill the dead once again. And so he asked Virender Sehwag to come on his show to ‘DISCUSS’ about Piers Morgan for being a complete ‘arsehole’.

However, Virender Sehwag had some different plans for this proposal. Have a look at his tweet.

Arnab Goswami wants me to speak on that British guys views on India on NewsHour,but that man doesnt deserve any airtime,hence I have denied

Well Done VIRU PAJI, that was indeed a sixer ! !

Fun Fact ! ! Virender Sehwag still didn’t clarify who he was referring to. Apart from obvious jokes, getting Arnab Goswami and Virender Sehwag together in a show would have been an amazing debate for sure. What are your opinion about it ? Share your views in the comment section below ! !

Sehwag Gave A Nickname To Ishant Sharma On His Birthday & It Seems Just Perfect!
7 Things That Only Crime Patrol Fans Will Understand!