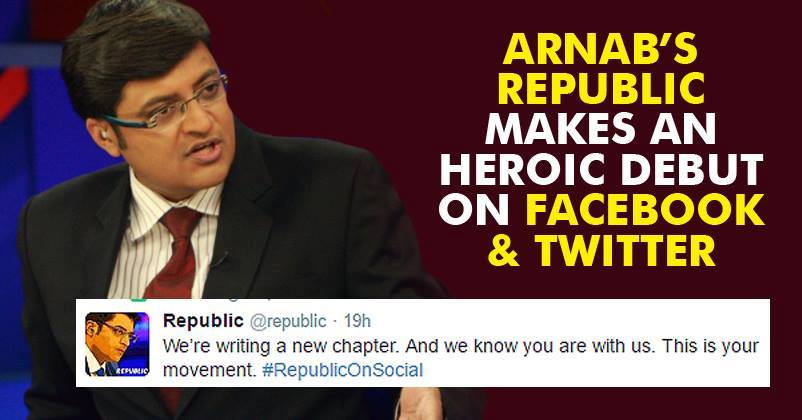 He is one of the few people who made the year 2016 INTERESTING for us. He shouted, he fought, he debated and then he left. He left the ‘Times Now’ at the end of the year 2016 and since then has made everyone wonder about his next big thing. As per the rumors, he was planning to launch his own news channel by the name ‘REPUBLIC’ and as bad or good it may sound, he is back again.

The prodigal’s son is back to where he belonged i.e NEWS Room. And he declared his arrival on Saturday 7th 2017 through this tweet on Twitter.

The nation wants to know! We are now live on social. Until we hit your screens, track the revolution here! #RepublicOnSocial pic.twitter.com/tYo3YB6Szo

By the time the tweet was published, their twitter handle had already surpassed the milestone of 5000 followers in less than 60 minutes. Right now, they are being followed by a large mass of 47 thousand twitter users in less than 24 hours. In his second tweet, he clearly meant business where he just made things clear. Have a look at it.

We are on the brink of shaking up the system all over again. Join the @Republic movement. #RepublicOnSocial pic.twitter.com/8lCL8EecbN

He also asked his followers to support his venture by joining him on this exciting journey.

We’re writing a new chapter. And we know you are with us. This is your movement. #RepublicOnSocial pic.twitter.com/UojKkO8R1z

And it’s not just the Twitter where he dropped the nukes. He has also launched a new Facebook page and a website. The facebook page has managed to get around 10,000 likes in less than 19 hours, although the website is still not that ALIVE as how we usually see Arnab Goswami in his prime time news hours.

However, people on twitter had some amazing and interesting reactions on Arnab Goswami’s debut on social media. have a look at them.

Considering @republic will focus more on interest of Political Master, not Public, name should have been RIP Public https://t.co/i2L5FBTnjx

Lol!
A bunch of cretins get together and call themselves @republic
Wait for their circus with Modi as ringmaster and Arnab as clown.

Cant wait for #ArnabGoswami to launch his own channel @republic Till then follow him here👇🏼https://t.co/riVedpFzct

Just to remind you Arnab, here you are restricted to 140 char. Lol!

Wishing Arnab Goswami the best for his new venture Republic. Eagerly waiting for ur channel to hit the TV screens. 🙂

So what is your take on his social media debut? It will be interesting to see how he will carry on his work when he already has such big amount of trollers waiting for him over there. But fellas, it’s Arnab Goswami with whom you will be messing up. He not going to hold back, neither will you. Cheers ! !