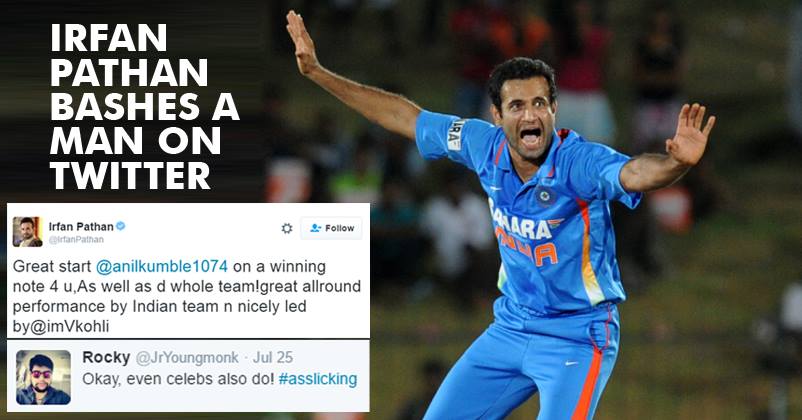 India and West Indies just finished up their 1st Test Match after a great victory by Indian Cricket Team. And as usual, the whole India rejoiced in happiness and started congratulating players for their all round performance. Many great cricketers including the likes of the VVS Laxman and Sachin Tendulkar congratulated the team on their wonderful win.

Irfan Pathan who is currently outside the team, congratulated them with more enthusiasm that what he used to do while he was inside the team. Such is his passion for the game. Always want to feel connected with the game. He expressed his happiness by tweeting and in his 1st tweet he congratulated Anil Kumble for his first maiden win as a coach.

In his 2nd Tweet he appreciated R. Ashwin’s all round effort where he scored a century and grabbed a five wicket haul.

Scoring 100 n taking 5for in the same game is so special,enjoy every bit of it mate.very well done @ashwinravi99

And in his last Tweet, he made sure to applaud the efforts of Muhammad Shami and Umesh Yadav for their excellent spells.

And that is what friends do, RIGHT ? Supporting each other in their ups and down. Irrfan Khan showed the perfect example of a perfect team mate.

Now these good gestures shown by athletes all around the world are always appreciated by the fellow Internet Users, but this one particular lad got it all wrong and interpreted these tweets as a mere ‘Boot Licking’.

A Twitter user expressed his ideas and assumptions, where he alleged Irrfan Pathan that he was intending to please people through his tweets so as to get back again in the team and replied in the most unacceptable and idiotic manner.

However, there is saying in hindi which goes like ‘Hathi Chale Bazar Toh Kutte Bhaunke Hazar’. I would like to add up that I AM NOT quoting this line so as to insult someone. Its just a reference.

Although Irrfan Pathan did not lose his cool and handled the situation perfectly just the same way as he do under pressure when he plays for Indian Team. Irrfan Pathan’s response was amazing and mature where he gave a lesson to the twitter user saying that you need a good heart for appreciating someone’s effort.

Now we all know how calm and cool Irrfan Pathan is on and off the field. I just wonder what Virat Kohli had to say, if he would have been under such an ignorant and foolish attack.

Social Media is a platform where we people have the right to express our opinions and connect to our idols and people whom we look up to. But some people unfortunately take this freedom in a complete wrong sense and end up getting into troubles by accusing and abusing people.

Freedom of expression is a must, but make sure that in the midst of expressing your views and opinions, do not end up abusing someone having a good heart.

Irfan Pathan was last seen in action during the Indian Premier League this year. He was a part of the MS Dhoni-led Rising Pune Supergiants. Unfortunately, he played in only a handful of game.

Virat’s Heavy Workout Video Will Give You Serious Gymming Goals!
Virat Kohli Is Not Originally From Delhi! You’ll Be Shocked To See His Ancestral Home