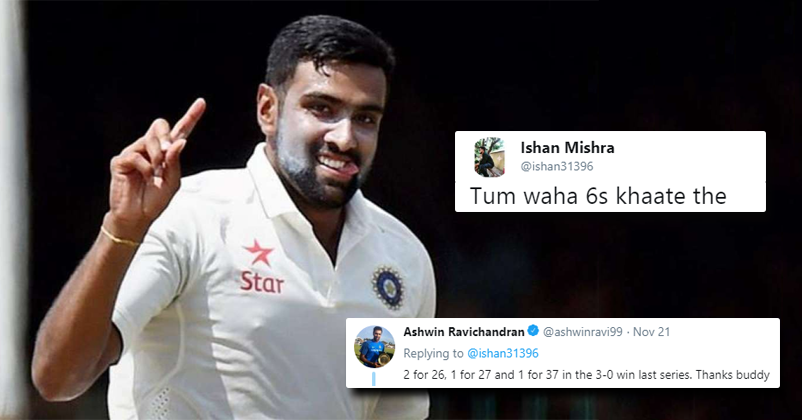 Some say that the best way to deal with online trolls is ignoring them. Clearly, Ravichandran Ashwin does not fall in that category. Recently, the cricketer was badly trolled online for his poor performance in Australia.

At the T20I in Brisbane, India kept fighting till the very end, before losing to Australia. However, it was Ashwin who had to face the brunt of a few trolls on Twitter. But don’t worry, his comebacks are bound to make you chuckle.

On Twitter, Ashwin had written a status mentioning the Australia pitch. In a complicated match, it was the size of the field which served as an advantage for the Indian team. While most grounds have smaller boundaries, aAustralian stadiums are known for having large, expansive grounds. As a result, Ashwin wrote that it was “a delight for the bowlers.”

The boundary sizes in Australia😎phew— is a delight for the bowlers. #AusvInd

Of course, trolls couldn’t wait to slam him.
A troll wrote, “Tum waha 6s khaate the” – a feeble attempt to be witty we must say.

But Ashwin is not someone who takes it lying down. He always makes it a point to reply to the trolls, thus shutting them up. This time he relied on statistics and facts to shut down his trolls. He replied to it saying, “2 for 26, 1 for 27 and 1 for 37 in the 3-0 win last series. Thanks buddy.”

Another troll mockingly asked him about the number of wickets in the Australian test. To this, Ashwin gave a fitting reply and won our hearts. He said, “I am the one whose got the records, please go and take a look. I can’t Google you and find you.”

I am the one whose got the records, please go and take a look. I can't Google you and find you.🙌

Ahh, Ashwin. Way too many keyboard warriors around, we should all take back a thing or two from this.