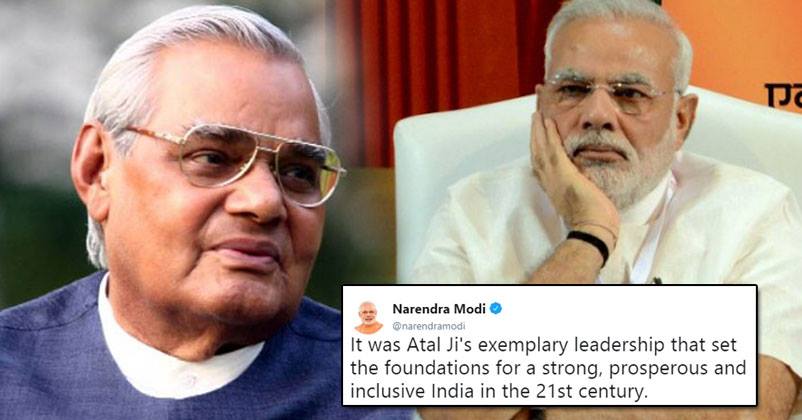 We lost a national gem today! Atal Bihari Vajpayee is not amidst us anymore and we are very sad.

Since 9 weeks, he was admitted to AIIMS for lung and kidney infection. Although doctors tried all possible treatments, nothing worked. Yesterday night, there was an update that he has been kept on ventilator.

Everyone prayed for the former Prime Minister’s health but God had something else in mind. He breathed his last at 5 pm today and very soon, the AIIMS issued another press release declaring the news.

The whole nation is mourning; even PM Modi is deeply saddened by this loss. As soon as this news is out, condolence messages started pouring.

Here are some of them by celebs, politicians and sportspersons;

India is at a great loss today. Shri #AtalBihariVajpayee ji’s contributions to our nation have been innumerable. Thoughts and prayers go out to his loved ones.

Today India lost a great son. Former PM, Atal Bihari Vajpayee ji, was loved and respected by millions. My condolences to his family & all his admirers. We will miss him. #AtalBihariVajpayee

With the sad demise of Bharatratna Atal Bihari Vajpayee ji, We have lost a great soul, an eloquent poet, orator par excellence, an excellent human being and one of the greatest Parliamentarians of India. pic.twitter.com/xRs1ohSop8

Deeply saddened at the passing away of Shri Atal Bihari Vajpayee. A reasoned critique in opposition and a seeker of consensus as PM, Atal Ji was a democrat to the core. In his passing away, India has lost a great son and an era has come to an end. My deepest condolences.

All of us who knew Mr. Atal Bihari Vajpayee are saddened to hear of his passing away. He was a great leader with a great sense of compassion and humor. He will be remembered fondly by a vast number of us.

My letter of Condolence to Smt. Namita Bhattacharya on the passing away of Shri Atal Bihari Vajpayee. pic.twitter.com/0NGl6R8yRY

My deepest condolences on the passing of our former Prime Minister Sri Atal Bihari Vajpayee Ji. One of the few politicians I always respected for his honesty and devotion to the national cause. May his soul rest in peace.

A sad day for the country, as we lose one of our greatest leaders. #AtalBihariVajpayee contributed so much for the betterment of the country. May his soul rest in peace 🙏🏻

Indeed a big loss for our country as we pay our last tribute to #AtalBihariVajpayee ji. He was a close family friend and his legacy will forever be remembered. Thank you for your selfless service, sir! My heartfelt condolence to everyone.

An era has passed with the demise of Shri Atal Bihari Vajpayee ji. Have fond memories of the great human being who will be remembered by one and all, cutting across party lines. My condolences to his family & may his soul rest in peace. pic.twitter.com/nSBNEKAfNJ

One of the few statesman who brought dignity and esteem to politics. His dream and steadfast application of Road connectivity changed and continues to change millions of lives in our country. Bowing with respect to our beloved leader #AtalBihariVajpayee ji.

“My poetry is the fighting warrior's will to win.” As the sun sets today, the new tomorrow will not be the same without the great statesman. Rest in peace Shri Atal Bihari Vajpayee. RIP #AtalBihariVajpayee

Its impossible to believe that Atal ji is no more,an irreparable loss.Atalji will continue to inspire us by his thoughts,principles&teachings!Not just in the past but he will be a Role Model for generations to come.
My Pranam to RashtraRushi Shri #AtalBihariVajpayee ji!
Om Shanti pic.twitter.com/XpR6h1UB7P

It was due to the perseverance and struggles of Atal Ji that the BJP was built brick by brick. He travelled across the length and breadth of India to spread the BJP's message, which led to the BJP becoming a strong force in our national polity and in several states.

Am deeply saddened. A great loss for India. https://t.co/rPNC7AoPpH

He had done a lot for our country and it’s surely a big loss to us. May his soul rest in peace.