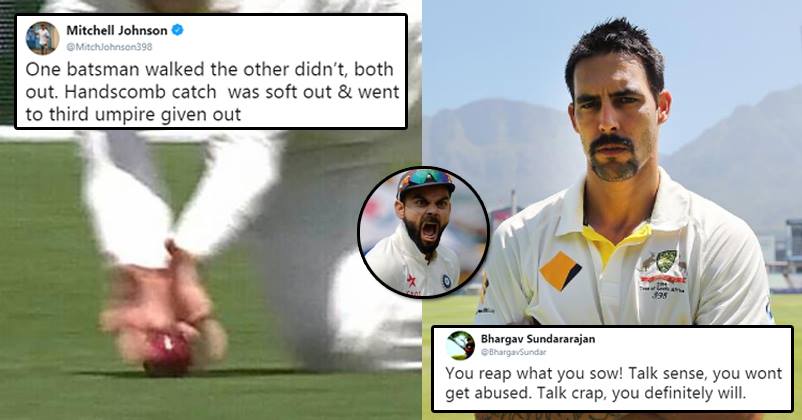 Cricket is known as the Gentlemen’s game but often we see the players of opposite sides getting into arguments or taking digs at each other.

The ongoing India vs Australia test series is turning out to be an interesting one on several perspectives.

Virat Kohli in the recent match showed an amazing performance and brought the team out of trouble. After a quick dismissal of openers, Virat took the charge and played amazingly till the 93rd over. He didn’t just score his 25th Test century but also paved the team’s path to victory.

However, his dismissal attracted a bit controversy as it turned out to be quite close.

The third umpire was involved and he called it an out which was indeed a big wicket for Australia. However, the Australian fast bowler Mitchell Johnson was quite unhappy and it was because Virat didn’t walk off after the dismissal. 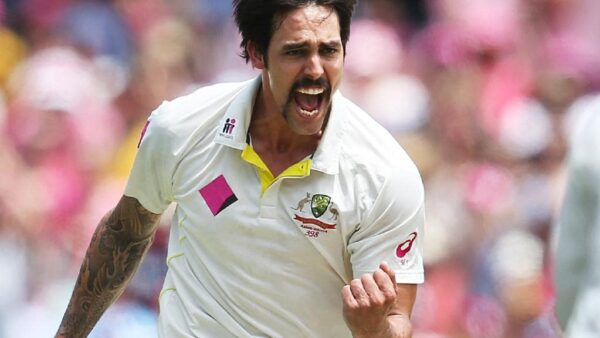 One batsman walked the other didn’t, both out. Handscomb catch was soft out & went to third umpire given out, Rahul catch given out on field hazelwood walked no questions. Scoreboard says out for both so happy with both decisions.

One batsman walked the other didn’t, both out. Handscomb catch was soft out & went to third umpire given out, Rahul catch given out on field hazelwood walked no questions. Scoreboard says out for both so happy with both decisions. pic.twitter.com/DQr70kZ7uT

But this tweet of him was not taken in a kind way by Twitterati who trolled him badly. Have a look at some reactions-

too much hate on kohli ..😄 world knows the past of you guys

Virat was not out . So don't compare.

Yet not appreciate Kohli hundred

Umpire should have asked Ricky Ponting before giving out.

Kohli wicket was not out

Well it was given soft out. So Kohli had every right to stay on the field and wait for the confirmation

An Australian calling out an Indian batsman for not walking. Oh the irony !!

What’s your take on this whole incident?

This Is How Mitchell Starc Pranked Nathan Lyon On Live TV, Starc Handled It Like A Boss
Aussie Media Claims That Virat Insulted Tim Paine By Making This Statement. Check Out