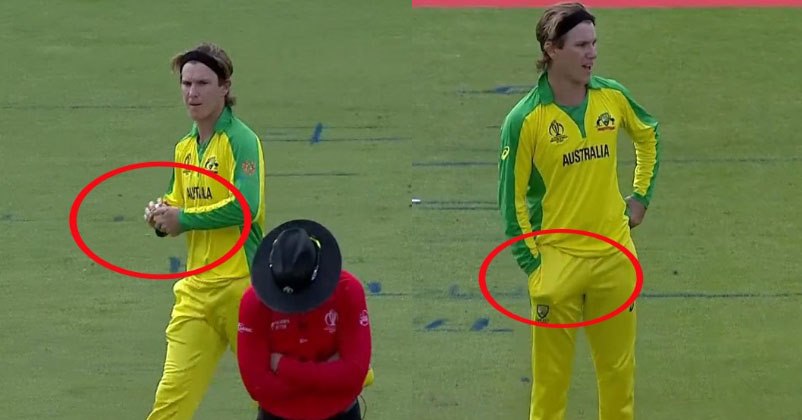 Australian cricket players are already infamous for ball tampering scandal which happened in 2018. During the third test match against South Africa in Cape Town, Cameron Bancroft was caught on camera tampering the ball. He was roughing up one side of the ball with the sandpaper trying to make it swing in flight. Captain Steve Smith and vice-captain David Warner were also found to be guilty.

Something almost same was caught on camera during India and Australia ongoing match. Australian player Adam Zampa was spotted rubbing something on the ball. His fishy body language caught everyone’s attention and went viral online rapidly.

Zampa was spotted taking something out of his pocket and rubbing it on the ball while taking the run-up for the delivery.

Since the 2018 ball-tampering scandal is still fresh in everyone’s mind, people are wondering if this is also one such attempt. Zampa is being slammed on Twitter for his suspicious activities.

Adam Zampa was spotted with his hands in his pockets while he was getting ready to bowl.

May i know why Adam Zampa is inserting his right hand to his right pokcet before every ball he bowl ? Is he having any salt paper !? Just curious to know . #staraikelungal #INDvAUS @ICC

With all their dirty tricks, Australia still won't win the World Cup

Virendra Sehwag Takes A Hilarious Dig On Adam Gilchrist Before Ind Vs Aus Match, It’s Hilarious
It Is A Meme Marathon Online After Kohli Is ‘Blessed With Soil From His School’