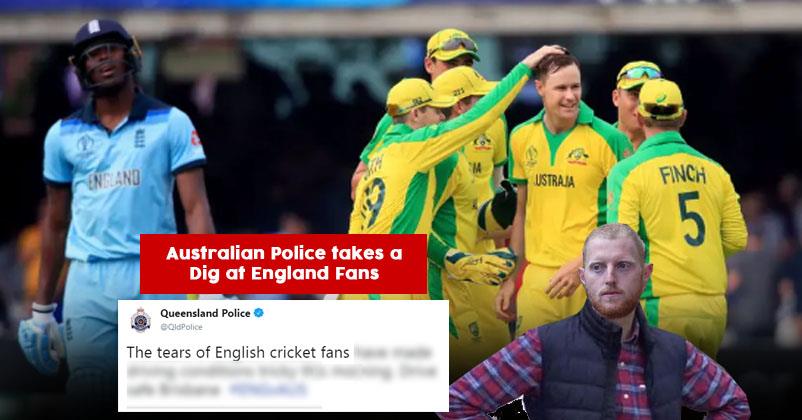 After Mitchell Starc’s astonishing yorker in England vs Australia match ended Ben Stokes’ marvelous 89 runs inning Australia became the first team to reserve its spot in the semi-finals. The delivery by Starc turned out to be the turning point of the game and it helped Australia win the game by 64 runs in the ongoing ICC World Cup.

Now England supporters were already depressed as the team is in dire need to win two remaining matches to reach in semifinals. The Queensland Police heightened the pain of the England cricket team fans by rubbing their defeat in their face. The police department posted a tweet which read, “The tears of English cricket fans have made driving conditions tricky this morning. Drive safe Brisbane”. The tweet was also a warning to the citizen and divers in the rainy weather.

The Queensland Police’s tweet is getting thousands of likes and shares on Twitter. While English are furious at the sarcasm, Australian supporters are hailing the police department and Indians are just laughing.

How about using a sandpaper to enhance the tyres' grip?

Fans at Worcestershire County Cricket Club were so upset after hearing England lost to Australia (again). Their own game had to be abandoned after the overwhelming Floods of Tears 😭😭 😁 pic.twitter.com/wIsbreuiJu

Put some sandpaper down. Should give drivers a bit of illegal assist.

@DennisCricket_ 😂 😂 even your police trolling England?

Savage….. audition for Britain's got talent….

I am English but this amused me a lot. Jeez if any English Police put this there would be uproar 😂😂

Continue Reading
You may also like...
Related Topics:Australian police, england vs australia