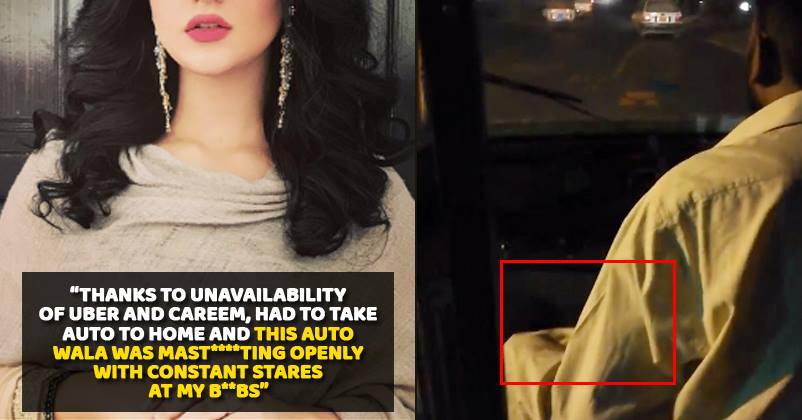 Being a woman is not easy especially when the world is full of perverts and they consider women as objects of pleasure rather than human beings.

Many incidents in which men are [email protected]@ting at women have been reported nowadays but the victim should make sure that the harasser should not go unpunished.

Shahtaj Qadir from Karachi, Pakistan, faced such a situation when she was returning home in an auto. The auto driver [email protected]@ted openly while driving and kept on staring at the breasts of Shahtaj. She has narrated the whole incident on the social networking site, Facebook and also posted a video.

Usually, we have seen that girls turn their faces from harassers or try to ignore them but Shahtaj is not one of those and she confronted the pervert auto driver smartly. In fact, she did something that the auto driver will remember for his lifetime and hopefully, he won’t repeat any such act in future. Shahtaj asked the auto driver to stop near the police station where she thrashed him badly.

There is no denying the fact that women have to fight for themselves if they want to be safe in this world as it is their struggle and they have to fight it to emerge as a winner. You just can’t depend on someone else all the time to provide you safety.

Long story short, I asked him to stop the auto near police station and beat the shit out of him which I’m sure he’ll remember for months!

Since harrassment is the new normal now, here are some tips for my girls which might help them in such situations.

Try to make a video or capture a photo of him. Note the number plate if possible.

Now the pig is under your control, beat him, kick him or try to gather the crowd near you but don’t let him go easily!

Girls! MUHAFIZ MARD is a fictional character our society has made to make us feel coward and weak, we’re our own protectors so stand for yourself!

More power to you Shahtaj! The world needs such brave girls like her who know how to protect themselves and teach an unforgettable lesson to perverts.